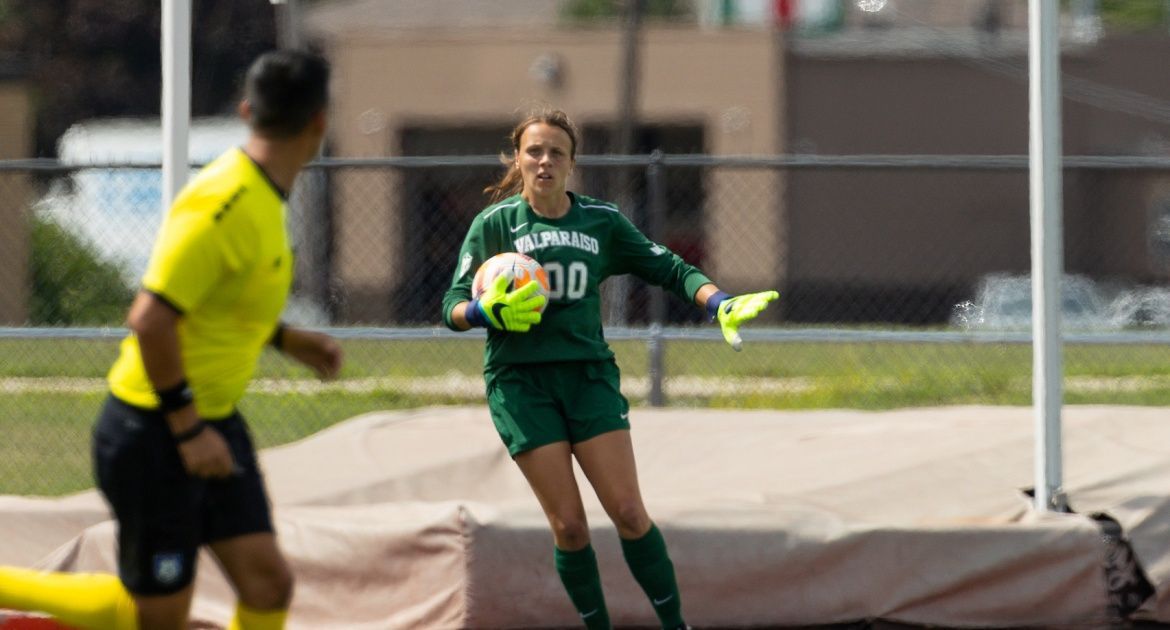 Nikki Coryell made four saves, including a diving effort in the final seconds, to register a shutout in Thursday's season opener.
Valparaiso at Eastern Ill. | August 18, 2022

Despite being the more dangerous side for most of the match, the Valpo soccer team found itself in need of a lunging save in the final seconds from two-time MVC Goalkeeper of the Year Nikki Coryell (Aurora, Ill./Metea Valley) to preserve a 0-0 draw in the Beacons’ season opener Thursday afternoon at Eastern Illinois.

“To get away with a tie on the road is a good result, but when you look at our performance, we weren’t quite good enough with the final pieces of our attack, and that’s why we got the tie today instead of maybe a win.”

“I thought Eastern Illinois came out organized and with a good game plan. We had to adjust a bit early on, but when we made that adjustment, the game definitely turned in our favor. We were able to build better, had possession and created good chances.”

“We didn’t put anything in the back of the net — we weren’t efficient in the 18-yard box, we shot early, we didn’t get the right runs into the box to produce the right service. But you have to look at the positive there as well — we were able to create those chances. We just have to be better with the delivery and in that last moment.”

“We have a lot to draw from today, and I think the performance of some of our younger players is definitely a positive. Molly put together a strong performance, was consistently aggressive in her debut. Peyton did a great job off the bench seeing some extended minutes. Cass entered, and she did a really good job setting the tempo and pressing to win the ball back. There’s a lot of little things we did well, now we have to build off today as we move towards Sunday.”

Valpo (0-0-1) opens the Brown Field regular season slate on Sunday afternoon when it hosts former Horizon League foe Youngstown State. Kickoff is slated for 1 p.m., and the match can be seen live on ESPN+.