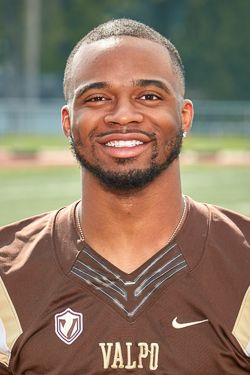 2018: Appeared in four games and totaled five tackles during an injury-riddled season… Received a redshirt and retained one season of eligibility… Had a season-high three tackles on Nov. 17 at Stetson … Member of the PFL Honor Roll.

2017: Started all 11 games for the Crusaders… Led the team with nine pass breakups after notching one in each of his first two seasons… Had two pass breakups on three occasions – Sept. 9 vs. Duquesne, Sept. 23 at Drake and Nov. 11 at Butler… Finished the season with 47 tackles, which ranked fifth on the team… 33 of his tackles came of the solo variety… Had a career-high six tackles in the home opener against Duquesne on Sept. 9… Made his first career interception on Oct. 14 vs. Marist, one of five Valpo interceptions in that game, a 49-15 victory over the Red Foxes… Came up with his first career fumble recovery on Oct. 28 vs. Morehead State, a game Valpo won 63-32… One of four Crusaders with multiple interceptions on the season… Second pick of the year came on Nov. 11 at Butler, a game that saw Valpo prevail 36-28 to secure the Hoosier Helmet.

2016: Competed in nine games and made 17 tackles (eight solos) during his sophomore campaign... Made one TFL, which came on Oct. 22 at San Diego... Set a new career watermark with seven tackles in the season finale on Nov. 12 against Jacksonville.

2015: Participated in seven games in his rookie season with the Crusaders ... tallied 20 tackles, including 11 solo stops ... debuted with five tackles Sept. 3 at Eastern Kentucky ... recorded season-high six tackles, as well as a pass breakup, Sept. 12 against Sacred Heart ... tallied three tackles apiece Oct. 10 at Drake and Nov. 14 against Morehead State.

Personal: Jay is the son of Esther Willis ... majoring in accounting and finance.