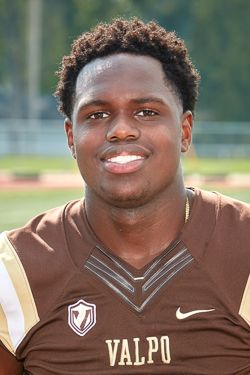 2019: Named All-PFL Honorable Mention… Had 30 catches for 484 receiving yards, averaging 16.1 yards per catch and 48.4 yards per game… Hauled in three touchdown passes… Ranked 10th in the PFL in receptions per game at 3.0 and ninth in receiving yards per game at 48.4… Finished the season on a high note, accruing 90 or more receiving yards in each of the final three games…  Had four catches for 60 yards in his season debut on Sept.14 at Central Connecticut… Made his first TD catch of the season on a 15-yard pass from Chris Duncan on Oct. 12 vs. Dayton… Had an eight-yard TD catch on Nov. 2 at Davidson, becoming the first Valpo player with multiple touchdown receptions this season…Had season highs in catches (six) and receiving yards (112) on Nov. 9 vs. Morehead State. That marked his first career game of 100 receiving yards or more… Followed his career-high 112 receiving yards against Morehead State with 99 at Butler on Nov. 19.