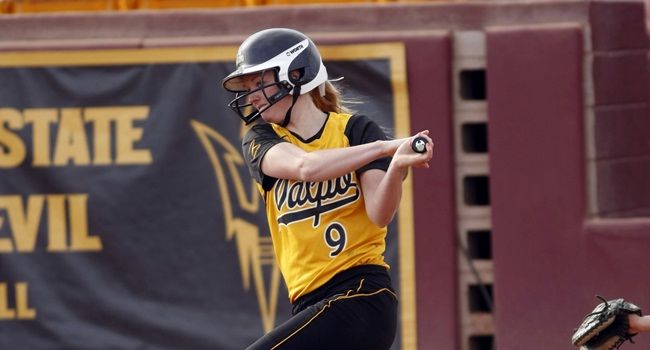 Playing under sunny skies and record-high temperatures for the earliest home opener in program history, the Valparaiso softball team easily captured a doubleheader sweep of visiting IUPUI, earning wins by scores of 8-1 and 7-1 Tuesday afternoon at the Valparaiso University Softball Field.

A pair of solid pitching performances helped the Crusaders to the sweep on a day which saw the temperatures rise past 80 degrees. Senior Alex Lagesse (Beecher, Ill./Beecher) held the Jaguars down in the opener, scattering six hits while striking out six in a complete-game win to improve to 6-5. Senior Sam McGee (Bloomington, Minn./Jefferson) followed in the nightcap by needing just 82 pitches for the complete-game victory, giving up just seven hits en route to improving to 6-2 on the year.

“We got two really good outings from our pitchers today,” said Crusader head coach Jordan Stevens. “Alex had good command of everything she threw, and so did Sam. It was one of Sam's best outings of the year.”

Offensively, it was redshirt sophomore Jessie Marinec (Alsip, Ill./Marist) who led the Crusaders out of the eight-hole in the lineup on Tuesday. Marinec stepped to the plate six times and reached on all six occasions, going 3-for-3 with two doubles and three walks, eventually coming around to score three runs. Senior Kelsey Phalen (Batavia, Ill./Batavia), hitting right in front of Marinec, reached base four times over the two games and scored three runs, while senior Sara Strickland (Scottsdale, Ariz./Horizon) also reached in four of her plate appearances, tallying three RBIs.

“I thought we didn't take a lot of very good at-bats, especially at the beginning of our first game,” said Stevens. “But to the credit of our players, when IUPUI gave us opportunities, we jumped on it, and that was the big difference today. They gave us a couple of chances in both games and we took full advantage.”

The opener saw the Crusaders set down in order in the first two innings, but Lagesse kept the game scoreless in the top of the third after IUPUI loaded the bases with two outs by inducing a groundout. Valpo then exploded for five runs in the bottom half of the frame. Phalen singled and Marinec doubled to lead off the inning, putting two runners in scoring position. After a pair of outs, sophomore Angie Doerffler (Fort Wayne, Ind./Concordia Lutheran) drew a walk to load the bases for Strickland, who also drew a free pass to plate Phalen with the game's first run.

Freshman Brittany Duncan (Fairborn, Ohio/Fairborn) then got on base and tallied an RBI the hard way, getting hit by a pitch to score Marinec and make it 2-0 Valpo. Senior Jordan Rutkowski (Alden, N.Y./Alden) stepped in and looked like she had hit into the third out of the inning, but IUPUI's second baseman dropped her pop-up, allowing both Doerffler and Strickland to score. Then, with runners on the corners, Rutkowski stole second and on the throw down, pinch-runner Tori Brown (Harrison, Ohio/Harrison) stole home to give the Crusaders a 5-0 advantage.

Valpo added a run to its side of the scoreboard without the benefit of a hit in the fourth, as Phalen walked with one out and advanced 60 feet at a time on a trio of wild pitches to push the lead to 6-0. An RBI double by IUPUI's Nicole Checkie in the fifth cut the Crusader edge to 6-1, but Valpo would close out the scoring with two more runs in the sixth. Phalen and Marinec led off the inning with back-to-back singles. Phalen eventually scored on a single by sophomore Amanda Wisniewski (Lake in the Hills, Ill./Huntley), while Marinec closed the scoring on a sacrifice fly off the bat of Doerffler.

Phalen went 2-for-2 with three runs scored in the opener, while Marinec went 2-for-2 with two runs. The duo combined for four of Valpo's five hits,as Winiewski tallied the only other Crusader base knock. Valpo did draw seven walks and get hit by two pitches in the opener. Nikki Thomas, the first of three IUPUI hurlers, took the loss to fall to 3-8 after surrendering six runs in her 3.1 innings of work.

Valpo claimed the lead for good in the nightcap in the bottom of the second inning, as Rutkowski doubled down the left-field line with one out and came home two batters later on a Phalen double that nearly left the yard. The Crusaders then added two more in the third as Doerffler singled and Strickland doubled with one out before both scored on a single into shallow center field by Rutkowski, making it 3-0 Valpo.

The Crusaders were held off the board by the Jaguars over the next two innings, and IUPUI cut the lead to two runs in the top of the sixth with a two-out RBI double from Jenny Royse. But McGee induced a groundout to end the frame without any further damage, and Valpo added four more runs in the bottom of the sixth with darkness quickly approaching to put the game out of reach. Both Wisniewski and Marinec scored on a two-out dropped pop-up by the Jaguars' shortstop, while Strickland followed with a first-pitch triple which scored Brown and Doerffler to close the scoring at 7-1.

Strickland went 3-for-4 with one run and two RBIs in the nightcap, while Rutkowski picked up a pair of hits and drove in two runs as well. Jocelyn Oppenhuis went the distance for IUPUI (7-18), falling to 3-7 despite giving up just three earned runs.

Valparaiso (14-9) opens Horizon League play this weekend on the road as the Crusaders travel to Detroit, Mich. for a three-game series against the Detroit Titans. The series begins with a Saturday doubleheader slated for an 11 a.m. CDT start, with live stats and a live chat available at www.valpoathletics.com.

“We have to have two days of good practice before heading to Detroit,” said Stevens. “It's important to start off on the right foot in league play, and it'll be challenging to open up on the road. We've got to work to get better the rest of this week so that we can take care of business this weekend.”