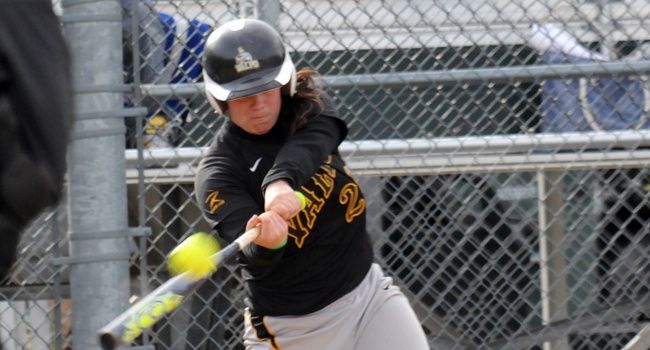 A three-run home run by senior Jordan Rutkowski (Alden, N.Y./Alden) gave Valparaiso the lead over Purdue in the third inning, but the Boilermakers answered with two runs in the fourth and the Crusaders were unable to push across the tying run as Purdue claimed a 4-3 victory over Valpo Thursday afternoon at the Valparaiso University Softball Field.

“We gave ourselves opportunities today, but giving ourselves those opportunities and not taking advantage of them is not enough to beat good teams,” said Crusader head coach Jordan Stevens.  “If we play like this against a lot of our teams on our schedule, it would be enough to win, but to take the step to the next level and beat good teams, we have to learn to play smarter.”

Purdue took the lead just seven pitches into the game, starting the contest with back-to-back doubles from Molly Garst and Andie Varsho.  With one run already in, the Boilermakers had runners on the corners with just one out, but Crusader starting pitcher Alex Lagesse (Beecher, Ill./Beecher) induced an infield lineout and a pop-up to get out of the jam.  Purdue added another tally in the third as Garst led off the inning with a double, stole third on a throw down behind her at second base and scored on a sacrifice fly to go up 2-0.

The Crusaders turned the scoreboard in their favor in the bottom half of the inning.  After the first two hitters went down in order, senior Sara Strickland (Scottsdale, Ariz./Horizon) poked a single into left field to keep the inning alive.  Freshman Brittany Duncan (Fairborn, Ohio/Fairborn) rapped a sharp single just inside the first-base bag to put runners on the corners and set the stage for Rutkowski.  The Crusader catcher took full advantage, launching a no-doubt three-run shot over the right-center fence to make it 3-2 Valpo.  The round-tripper was Rutkowski's 10th of the season, matching her mark from 2011 and just one off Valpo's single-season record, and gave her 37 RBIs on the year, already tied for fourth-most in a single year in program history.

Purdue answered in its next at-bat, however, with the eventual deciding runs.  With one on and two outs, Ashley Burkhardt hit a looping liner into shallow left field which sophomore Amanda Wisniewski (Lake in the Hills, Ill./Huntley) dove to make a play on.  She couldn't come up with the catch, however, and it resulted in a game-tying triple as the ball rolled down the left-field line.  Burkhardt then quickly put the Boilermakers on top, scoring an unearned run during the next at-bat on a passed ball.

Valpo had runners on in each of its last four at-bats, but never could score the tying run.  A leadoff single by senior Kelsey Phalen (Batavia, Ill./Batavia) in the fourth was erased by a double play, while the Crusaders were unable to advance sophomore Angie Doerffler (Fort Wayne, Ind./Concordia Lutheran) past first in the fifth inning after she reached on a one-out error.  In the sixth, Lagesse sent a grounder through the right side and Phalen followed with a four-pitch walk to put two on with one away, but a sharp grounder to third turned into Purdue's second double play of the day.

The Crusaders had one final threat left in them, however, as they stepped to the plate for the bottom of the seventh.  Wisniewski dropped a Texas Leaguer into shallow right field for a leadoff single, and two batters later advanced to second as the Boilermakers committed an error attempting to erase the lead runner.  A groundout moved both runners into scoring position with two outs, but the potential tying and go-ahead runs were left stranded following another groundout.

Lagesse took the loss for Valpo, falling to 8-6 after surrendering four runs, three earned, in six innings of work while striking out three.  Senior Shaleigh Jansen (Ottawa, Ill./Ottawa Township) entered in relief and pitched a perfect seventh inning.  Lexi Moore claimed the win for Purdue (19-9) to improve to 13-2 on the year with her complete-game effort.  Strickland paced the Crusaders' eight-hit attack with two base knocks, while Phalen also reached base twice and Rutkowski drove in all three Valpo runs.

Valparaiso (17-10) returns to Horizon League play this weekend with a three-game set at home against Green Bay.  The series opens with a doubleheader Saturday afternoon beginning at 1 p.m., with live stats available all weekend through www.valpoathletics.com.