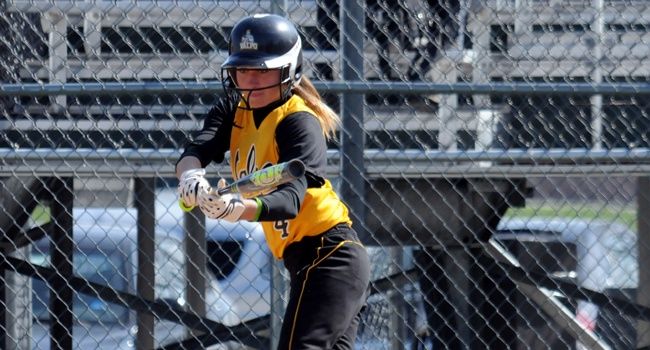 Valparaiso got stellar performances in all facets of the game on Saturday afternoon in sweeping a Horizon League doubleheader from Green Bay, 8-0 and 17-0, at the Valparaiso University Softball Field.  The opener ended via run rule on a record-tying home run from senior Jordan Rutkowski (Alden, N.Y./Alden), while the nightcap was highlighted by a 12-run fourth inning for the Crusaders.

“We got good production from everybody today, starting in the circle,” said Crusader head coach Jordan Stevens.  “Offensively and defensively, we were on top of our game as well.  It was just a good all-around outing in both games.”

Senior Alex Lagesse (Beecher, Ill./Beecher) shut the Phoenix down in the opener, surrendering just two hits, only one of which left the infield.  Lagesse struck out five Green Bay hitters in the 92-pitch complete game effort, improving to 9-6 on the year.

Meanwhile, the Crusader offense claimed the lead in its first time at the plate.  With two outs, senior Sara Strickland (Scottsdale, Ariz./Horizon) laced a double into center field.  After a four-pitch walk to freshman Brittany Duncan (Fairborn, Ohio/Fairborn), Rutkowski knocked a single through the left side of the infield, easily enough to plate Strickland with the game's opening run.

Valpo then stepped up the aggressiveness to salt the game away in the third inning.  The Crusaders needed just eight pitches over a seven-batter span to put a five-spot on the scoreboard.  Sophomore Angie Doerffler (Fort Wayne, Ind./Concordia Lutheran) started the crooked inning with a one-out infield single, and after a fielder's choice, Duncan lined a double into the right-center gap to score Strickland.  Rutkowski then took the first pitch to the wall in right for a two-bagger, bringing Duncan around to make it 3-0 Valpo.

Redshirt junior Joylyn Ichiyama-Drewry (Torrance, Calif./Redondo Union) kept the train rolling by knocking a single through the left side to bring Rutkowski in and increase the lead to 4-0.  Senior Kelsey Phalen (Batavia, Ill./Batavia) became the first Crusader in a six-batter stretch to not swing at the first pitch, taking one before picking up a base knock of her own.  Redshirt sophomore Jessie Marinec (Alsip, Ill./Marist) then pushed the advantage to 6-0 with a drive to the wall in right-center field, scoring both Ichiyama-Drewry and Phalen.

Lagesse faced the biggest threat to her shutout in the fourth inning, as back-to-back walks put two on with one out, but the senior picked up a strikeout and then induced a pop-up to get out of the inning.  Valpo added a single run in the bottom of the fourth, as Strickland reached on a one-out error and eventually scored when Phalen was hit by a pitch with the bases loaded.  The Crusaders then closed the game with a walk-off round-tripper in the bottom of the sixth, as Rutkowski drilled a 2-2 pitch over the center-field fence to cap the run-rule victory.  For the senior, it was her 11th home run of the season, matching KC Boldt's single-season record set just last year.

Rutkowski was a perfect 4-for-4 in the opener, scoring two runs and driving in three.  Duncan added two hits as well to the Crusaders' 12-hit attack, while Strickland scored three runs and Marinec drove in a pair.  Ashley Nannemann took the loss for Green Bay, falling to 6-4 after surrendering seven runs in 3.2 innings of work.  Phalen also broke Valpo's career record for putouts in the opener, breaking Beth Adamski's previous mark of 1,038 career putouts with the final out of the top of the sixth.

Senior Sam McGee (Bloomington, Minn./Jefferson) took to the circle in game two and matched Lagesse's shutout with one of her own, improving to 8-2 on the season.  McGee gave up just four hits while striking out seven Phoenix batters.  The senior faced her biggest threat right away in the first, as back-to-back singles and a hit batsman loaded the bases with two outs, but McGee induced a grounder to Ichiyama-Drewry at third base to end the inning.

“Both Sam and Alex hit their spots really well today,” said Stevens.  “They both looked in charge when they were in the circle and had a really good demeanor out there, which was nice to see.  Both of them had an inning where they had some trouble, but did a good job to get out of it.”

The Crusaders advanced runners to third in each of the first two innings, but couldn't push the opening run across the plate, stranding two on in the first inning and getting a runner thrown out at the plate to end the second.  Valpo cracked the scoreboard finally in the third, though, putting up its second five-spot of the afternoon.  Doerffler started the inning with a walk and advanced into scoring position when Duncan took an 0-2 pitch and drilled a liner off the base of the left-field wall two batters later.

Rutkowski followed by driving a pitch to straightaway center field to score Doerffler with the game's first run, advancing Duncan to third.  The freshman tagged up and scored on a sacrifice fly to deep center from Ichiyama-Drewry, and Phalen connected on a single through the left side to plate Rutkowski.  Marinec then put the capper on the five-run frame with a two-run homer to center, giving Valpo a 5-0 lead.

That inning was just a precursor to the bottom of the fourth, however, as the Crusaders put together one of the biggest innings in program history.  The first 11 batters of the inning reached for Valpo as it surpassed the capabilities of the scoreboard in putting up 12 runs on 11 hits and two Green Bay errors.  Junior Hayley Bridwell (Lemont, Ill./Lemont) tallied two hits and scored two runs in the inning, while sophomore Amanda Korb (Indianapolis, Ind./Lutheran) scored twice in the inning as well after entering as a pinch-runner.  Rutkowski also picked up a two-RBI double in her first plate appearance of the inning, her 43rd RBI of the season, already breaking Valpo's single-season record in that category just 29 games into the year.

A career-high four-hit game out of the leadoff spot from Bridwell, who had just two at-bats on the season entering the game, highlighted Valpo's 18-hit attack in the nightcap.  Marinec picked up three hits, while Doerffler, Phalen and Rutkowski each had multiple hits as well as 10 different players picked up base knocks.  10 different Crusaders scored runs as well, led by three from Doerffler, while Ichiyama-Drewry and Rutkowski drove in three runs each.  Lauren Danner took the loss for Green Bay (10-11, 0-2 Horizon), falling to 1-2 after giving up seven runs in three-plus innings in the starting assignment.

Valparaiso (19-10, 5-0 Horizon) looks to close out the series sweep on Sunday as the Crusaders host the Phoenix for a single game at noon at the Valparaiso University Softball Field.  Live stats will be available through www.valpoathletics.com.