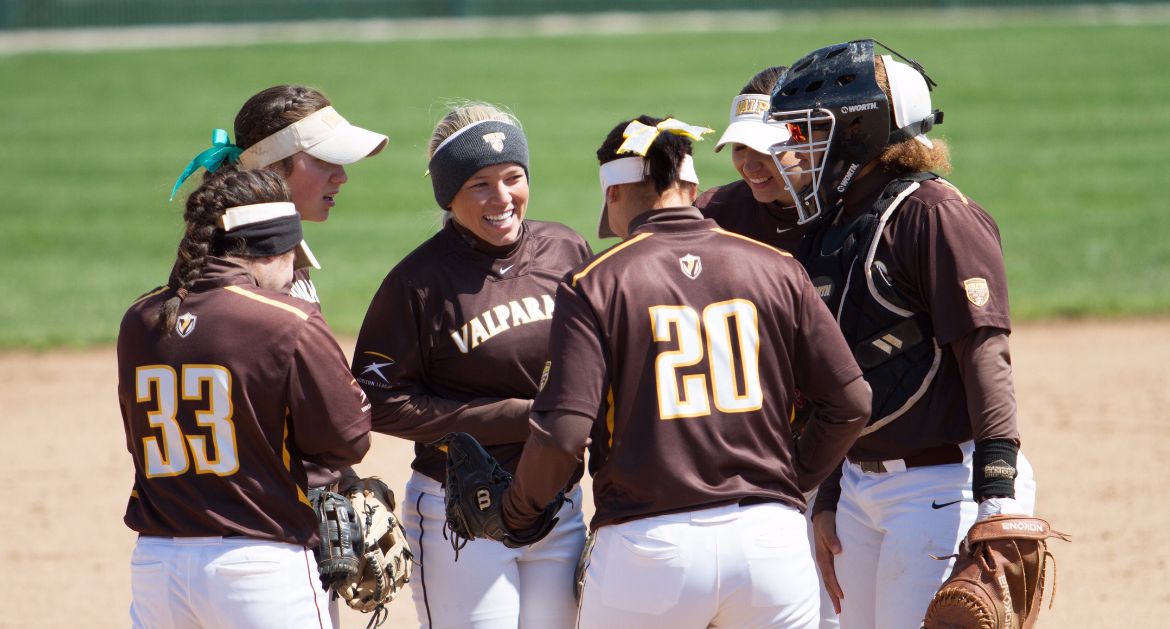 Next Up in Crusader Softball: The Valparaiso University softball team passes the halfway mark of the Horizon League schedule this week, as six league games await the Crusaders over the next five days. The week kicks off with a three-game road series Tuesday and Wednesday - just a short road trip over the state line to UIC. Valpo then returns home this Friday and Saturday to host Cleveland State.

Previously: Valpo's scheduled three-game series last week at Green Bay first became a home series for the Crusaders, and then was shortened to just a single doubleheader thanks to the fickleness of Mother Nature. Valpo opened the twinbill with a two-hitter against the Phoenix, earning an 11-1 run-rule victory, but Green Bay turned the tables in the second game, sending the Crusaders to a 12-4 defeat.

Following the Crusaders: All six games this week are slated to have live stats available via ValpoAthletics.com, with most of the games having live audio broadcasts and the three home games versus Cleveland State being broadcast live on ESPN3. Numerous Valpo games are slated for broadcast on ESPN3.com this spring, including most scheduled home games and a number of road Horizon League contests.

Head Coach Kate Stake: Kate Stake was hired as head coach of the Valparaiso softball program on July 23, 2014 and is in her second season as head coach, owning 24 victories. Stake arrived at Valpo with eight seasons of assistant coaching experience at the Division I level, most recently serving as an assistant at mid-major power Hofstra.

Cleveland State - The Crusaders trail the all-time series with the Vikings by a narrow 18-17 margin, but own a 13-11 advantage over CSU since joining the Horizon League - including a 12-3 mark since the start of the 2011 campaign. Last season, facing off in a three-game series in Cleveland, Valpo dropped the opener to the Vikings before bouncing back to earn wins in the final two games.

Looking Ahead: Next week sees the Crusaders travel an hour east for a non-league matchup on Wednesday at Notre Dame before Valpo once again returns home for a weekend Horizon League series - this time hosting Detroit.

Scouting the Opposition: UIC - The Flames enter this week's series with a 20-12 overall record and own a 6-2 mark to date in Horizon League action. UIC boasts a team ERA of 2.55, led by the effort of Elaine Heflin in the circle, who owns a 12-5 record with a 1.87 ERA and 96 strikeouts in 108.1 innings of work. Offensively, LaRi Mitchell is hitting .402 and has scored 26 runs, while Laura Swan has driven in a team-best 32 runs.

Cleveland State - The Vikings enter the week at 8-23 overall and 1-5 in Horizon League play, with a three-game mid-week series versus Youngstown State on the docket prior to arriving in Valpo for this weekend's contests. Erica McNew leads the CSU offense, hitting .464 with seven home runs and 27 RBIs, while Katelind Phillips is hitting .398 with a team-high 20 runs scored.

Continuing Horizon League Play: With two Horizon League series on the schedule this week, the Crusaders are looking to finally get through a full series without alterations due to weather. Valpo's first series, at Youngstown State, had the initial game postponed from Friday to Sunday, while each of the last two series have been shortened from three games to just a single doubleheader.

Home Field Advantage: While Valpo dropped a home game for the first time this season in the back end of the Green Bay doubleheader, snapping its home winning streak dating back to last year at nine straight games, the Crusaders have still enjoyed a distinct home field advantage. Valpo is now 5-1 at the Valparaiso University Softball Field this season, with three of its next four league series slated to be home sets.

Nadler Keeps Reaching Base: On Feb. 27 against Southeast Missouri, sophomore Taylor Nadler went 0-for-3 at the plate to drop to 2-for-17 for the season. Since then, Nadler is hitting .400 (22-for-55) with five doubles and five home runs, raising her batting average to a team-best .333. The sophomore is in the midst of a 21-game on-base streak, tallying hits in 16 of the contests and has either walked or been by a pitch a combined seven times in the other five games.

Strong Offense Versus the Phoenix: Valpo tallied 19 hits as a team in the doubleheader with Green Bay last week, hitting .396 as 11 different players picked up base knocks. Six different players launched home runs versus the Phoenix, including the first career round-trippers for both Jasmine Ramirez and Sierra Pico. Taylor Lawson went 4-for-8 to lead the way, while Nadler and Carly Trepanier each registered three hits over the two games.

Weissenhofer Claims Weekly Honor: For the second time this year, senior Taylor Weissenhofer was named the Horizon League Pitcher of the Week, this time on Apr. 4 after recording shutouts against both Bowling Green and Northern Kentucky. Weissenhofer surrendered just three hits and struck out eight in the shutout of BGSU, and followed with her second one-hitter of the season, posting seven strikeouts, against NKU. The senior, who previously was named HL Pitcher of the Week Mar. 14, didn't give up an extra-base hit in either game and allowed just one runner past second base.

New Records This Year: A pair of Crusader seniors have set new Valpo career records already this year. In the circle, Taylor Weissenhofer broke Valpo's career strikeouts record in the Crusaders' third game of the year - Feb. 13 versus St. John's - and now owns 505 career K's. At the plate, Kaitlyn Ranieri drew a walk in her first plate appearance of the year to set a new Valpo career record in that category and currently has 110 career walks.

Moving Up the Charts: While Ranieri already tops the career walks chart, she is poised to advance on a number of other career charts in the coming weeks. The senior is currently third in Crusader history in doubles (43, two shy of second), third in hits (208), third in total bases (329), fourth in home runs (24, one shy of third), fourth in runs scored (125) and fourth in RBIs (104, three shy of third).