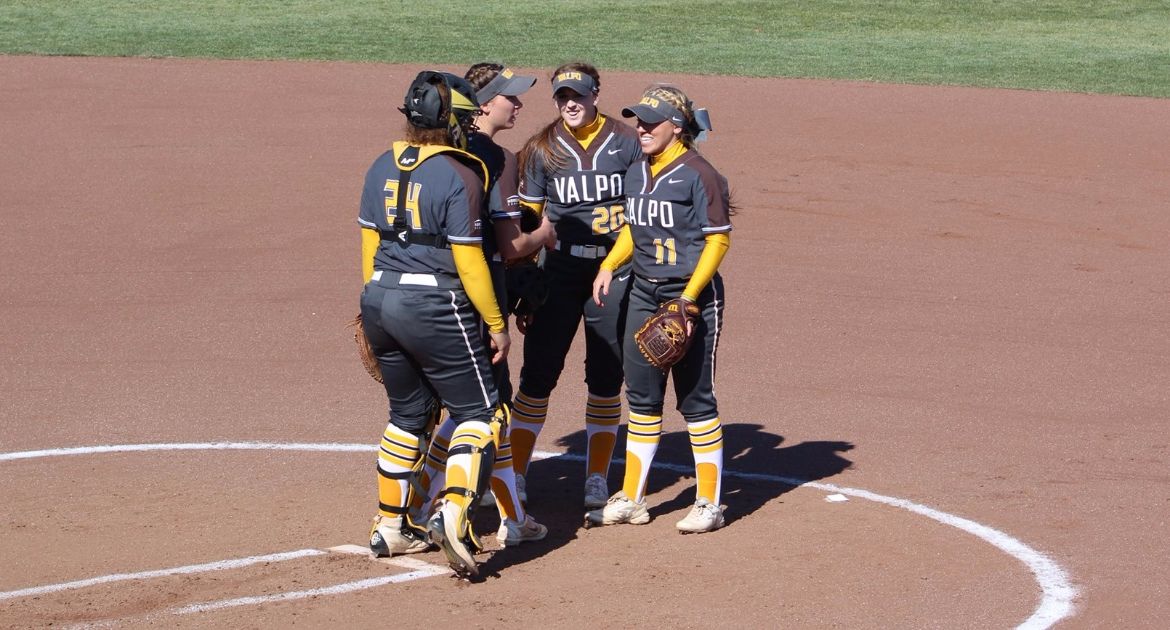 Next Up in Crusader Softball: A stretch of 22 straight games away from home to open the 2017 season concludes this week for the Valparaiso University softball team, as the Crusaders head to Loyola for a single non-league game on Tuesday before opening up Horizon League play this weekend at Northern Kentucky.

Previously: Valpo went 2-2 last weekend at the Hawkeye Invitational, falling 12-4 to Creighton and 3-0 to Iowa on Friday to start off the weekend. The Crusaders then rallied in the seventh inning for a 5-4 win over South Dakota before concluding the weekend with a 3-1 victory versus South Dakota State.

Looking Ahead: The Crusaders are scheduled to open up the home slate next week at the Valpo Softball Complex with four games. The schedule has Valpo hosting IUPUI for a single game in non-league play on Wednesday, March 29 before facing off with Youngstown State for a three-game league series March 31-April 1.

Following the Crusaders: All four games this week will have live stats, while the game at Loyola on Tuesday will be broadcast live on ESPN3. All league home games and select road games will will be available on ESPN3, WatchESPN and the ESPN app.

Head Coach Kate Stake: Kate Stake was hired as head coach of the Valparaiso softball program on July 23, 2014 and is in her third season as head coach, owning 46 victories. Stake led the Crusaders to the 2016 Horizon League Championship and a berth in the NCAA Tournament - the third in program history. Stake arrived at Valpo with eight seasons of assistant coaching experience at the Division I level, most recently serving as an assistant at mid-major power Hofstra.

Series Notes: Valpo will match up with its third-most common opponent all-time on Tuesday as the Crusaders take on Loyola, as the Ramblers own a 37-24 advantage in the series. The two squads have not matched up since Loyola left the Horizon League following the 2013 season, as the Ramblers earned a three-game sweep that year. Loyola was the Crusaders' opponent when Valpo won twice on Championship Saturday to claim the 2012 Horizon League Championship.

Last season, Valpo posted a pair of shutout victories (2-0, 8-0) over Northern Kentucky in the Norse's first season as a Horizon League member. The Crusaders are now 2-1 all-time versus NKU, as the only previous meeting was an NKU win back in 1991.

Trepanier Matches Mark: Sophomore Carly Trepanier hit successfully in each of Valpo's first three games last weekend, extending her hitting streak to 16 straight games - matching Joylyn Ichiyama (2013) and Taylor Callahan (2007) for the longest-known hitting streaks in program history. While Trepanier went hitless in the weekend's finale versus South Dakota State, she did draw a walk to extend her on-base streak to all 18 games this season. On the year, Trepanier is hitting .453, good for 40th in the nation to date.

Winning Away From Home: As is the norm, the Crusaders have yet to play a home game yet this season, and Valpo will face four more games away from Northwest Indiana this week before finally taking its home field. With 12 road/neutral wins already this season, the Crusaders already own more victories away from home than they've had either of the last years (10 both seasons) and are poised to finish with a much better winning percentage in road/neutral games this year than they had in 2014 (12-6 this year; 14-30 in 2014).

One Final Turn At Bat: The Crusaders took full advantage of their hacks at the plate in the seventh inning Saturday against South Dakota, putting together a walk, a sacrifice bunt and four straight singles to earn the come-from-behind, 5-4 walk-off victory. The win was Valpo's first of the season when trailing after six innings (1-5) and was the Crusaders' first-such win since rallying from a 4-0 deficit to win the Horizon League Championship title game last year. Dating back to 1999, Valpo has never had more than two wins in a single season when trailing after six innings and was 10-308 (.031) in such situations in that time frame prior to Saturday's win.

Fielding Our Positions: The Crusaders enter this week ranked 11th in double plays/game and 27th in fielding percentage, having committed just 16 errors in their first 18 games of the season while turning 10 double plays. Only one Valpo player has committed more than two errors on the year, while junior Jasmine Ramirez has held steady at first base, as she owns a streak of 170 consecutive chances without an error dating back to the middle of last season.

Grossmann Earns League Honors: Junior Kenzie Grossmann became the latest Crusader to earn a weekly award from the Horizon League office, as she was named the league's Pitcher of the Week on Monday. Grossmann helped lead Valpo to back-to-back wins to close out the Hawkeye Invitational. The junior surrendered just one hit in 2.2 innings of shutout work while striking out four to earn a relief win versus South Dakota, before following with a complete-game five-hitter, striking out seven and allowing just one runner past second base, as the Crusaders closed out the weekend with a 3-1 win over South Dakota State.

Stewart Continues to Rake: Stewart had a quiet week by her standards so far this year last weekend at the Hawkeye Invitational, but still went 3-for-10 with a pair of RBIs while drawing four walks in the Crusaders' four games. The senior continues to rank among the nation's best in a number of categories - seventh in RBIs/game, 10th in slugging percentage, 11th in home runs/game, 16th in on-base percentage and 22nd in walks/game. Stewart has also reached base successfully in all 18 of Valpo's games this season.

Picking Up Ws: Grossmann enters this week leading all Horizon League pitchers with seven wins on the year after picking up a pair of victories last weekend. The junior also paces the league with her three saves, tied for sixth nationally, and has registered 50 strikeouts in 49.2 innings of work, good to lead the league in Ks per seven innings as well.