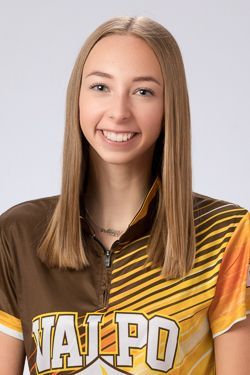 2018-19: Started 29 traditional matches in her sophomore year at Valpo ... finished campaign with a 180.0 average ... surpassed 200 seven times and led Valpo in six matches ... paced Valpo with a then-career best 215 to kick off traditional action Oct. 27 at the Bearcat Hammer Open in a win over #14 Lincoln Memorial ... rolled a 209 in first traditional match of Crusader Classic, Nov. 3 versus #21 UW-Whitewater ... led Valpo against the Warhawks of UW-Whiterwater at the Warhawk Classic Nov. 10 with a 207 ... enjoyed the best tournament of her career at the Mid-Winter Classic in a four-match stretch Jan. 12 ... posted the second-best average in the tournament field (minimum four traditional matches) with a 224.3, breaking 200 in all four matches ... notched a 203 in win over #24 Central Missouri and then led Valpo in three straight matches against #14 Louisiana Tech (then-career high 234), Jackson State (205) and #22 Maryville (new career best of 255) ... the 255 against Maryville was Valpo's second-highest traditional match score of the season ... tallied a 199 at #3 Nebraska as part of the Big Red Invitational Mar. 2 ... named to the SBL All-Academic Team.

2017-18: Made 11 starts in traditional action for the Crusaders as a freshman ... posted a 185.5 average as a rookie ... rolled four games of 200 or better, while pacing Valpo on three occasions ... led Crusaders in first career start, rolling a 209 at the Crusader Challenge Nov. 5 versus Augustana ... made three starts in traditional matches Nov. 11 at the Warhawk Classic, including team-best games of 205 against Maryville and a season-best effort of 210 versus St. Francis (Pa.) ... rolled a 204 against #11 Central Missouri on Jan. 13 at the Mid-Winter Invitational.

Prep: A four-year letterwinner for the Knights ... finished third at conference tournament as a senior and as a junior ... named Buffalo Wild Wings Athlete of the Month for the Far North Zone in December of 2016 ... rolled the high game at the Prospect H.S. tournament as a senior ... set school record for highest game bowled in match play during senior season, rolling a 296 ... bowled at Junior Gold tournament each of the last two years ... spent three years with Junior North End Travel Bowling ... member of National Honor Society ... an Academic All-Conference selection.