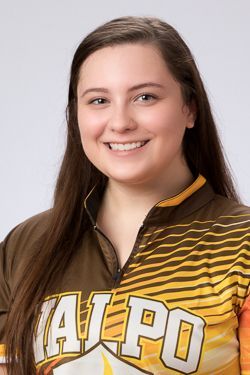 2019-20: Started 39 of Valpo's 42 traditional matches in her rookie year ... posted a 184.9 average, good for second on the team ... broke 200 in 11 matches and paced Valpo 11 times, both of which were team-high totals ... made traditional debut with a team-high 212 Oct. 19 against #7 Maryland Eastern Shore at the Allstate Sugar Bowl Invitational ... led Valpo again later that day with a 202 versus #19 UAB ... opened traditional play Oct. 26 at the Bearcat Open with a team-high 211 against #19 UAB ... named Tournament MVP of the Crusader Classic Nov. 1-3, leading all individuals who started all six traditional team matches with a 200.3 average ... opened traditional action at Valpo's home tournament with a team-best 213 in a victory over Spalding Nov. 2 ... rolled Valpo's single-game high of the year to close out play that same day, posting a 258 in a win over Elmhurst ... concluded traditional play at Crusader Classic with a team-best 234 in a win over Lewis ... rolled a team-high 208 to kick off traditional action at Warhawk Classic Nov. 9 against Upper Iowa ... tallied back-to-back 201 games Jan. 11 at Stormin' Blue and White Classic, the first helping Valpo to a win over #25 Prairie View A&M and the second leading the squad in a bye matchup ... opened traditional play at Columbia 300 Saints Invitational Jan. 25 with a team-best 216 in a win versus Spalding ... also led Valpo later that day in a victory against Drury with a 196 ... helped Valpo to one-pin win over #8 Youngstown State Feb. 29 at Big Red Invitational with a game of 215 ... paced the team later that day with a 193 against #5 Arkansas State.