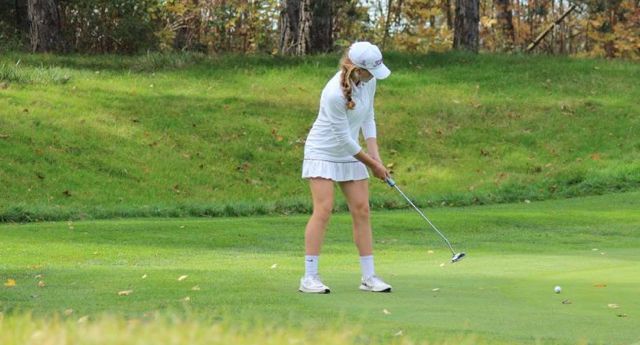 Nelson will join the Crusaders after an accomplished prep career as a three-sport athlete at Spring Lake High School in Spring Lake, Mich. In addition to golf, she competed in basketball and softball at Spring Lake, also the alma mater of current Crusader golfer Kayla Krueger.

“Kayla told me about playing golf at Valpo and how good of an experience she is having,” Nelson said. “That helped me make my college decision. I know from her that Valpo provides a good atmosphere. I love golf, so the chance to pursue that passion at the Division I level made it an easy decision.”

“She’s an exceptional athlete who has played in the state finals in Michigan all four years and won three of them,” Haas said. “There are a lot of similarities between Madelyn and Kayla. It quickly became clear to me that bringing her in would be a really nice addition to our program. She has a toughness that she has gained from playing other sports. That’s going to really help her make the adjustment to collegiate golf.”

Another of Nelson’s significant accomplishments came when she was awarded the sole female nomination to the 2018 West Michigan Showcase event by Spring Lake Athletics. She’s ready to continue to thrive as she makes the adjustment to collegiate golf in the Missouri Valley Conference.

“I think it will be a different atmosphere playing in college,” she said. “I know the course is longer, so I need to practice at a greater distance this summer to get used to that. It will be more competitive, which is exciting because I like the competitiveness.”

Nelson will join previously announced signees Morgan Kier and Payton Hodson to form the 2018-2019 freshman class for the Crusaders, who will look to build upon a strong finish to their first season in the Missouri Valley Conference.

“I think our program is in great shape going forward,” Haas said. “We have players coming back who are among the school scoring average leaders. We have three really good athletes who are also solid academically joining the program. That’s something we’ve tried to build – all of them are not just golfers; they’re athletes. Having that athleticism will help them make the jump from the prep level to the collegiate level.”