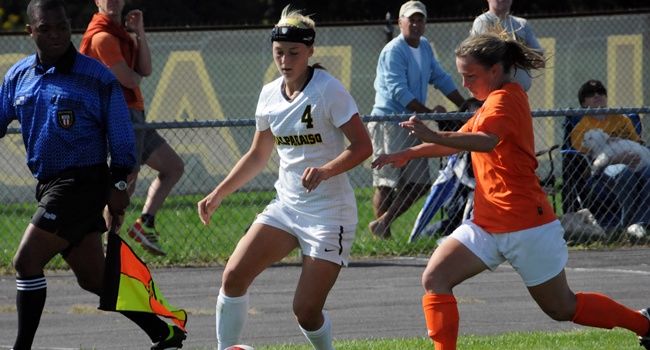 The Valparaiso women’s soccer team got an early goal on Sunday, as a pair of freshmen teamed up to find the back of the net in the eighth minute, and the Crusaders made that tally stand up, defeating Saint Mary’s (Calif.) 1-0 Sunday afternoon in Moraga, Calif.

"Overall, it was a good win for us today," said Crusader head coach John Marovich.  "Obviously, when you play Friday/Sunday, it's always difficult to come up with a very good performance on Sunday, especially on the road, and we were able to do that today."

Valpo put the pressure on the Gaels early in the match, earning a corner kick in the sixth minute which resulted in a header over the bar.  The Crusaders’ next opportunity was all the offense it would need, as in the eighth minute, freshman Jordyn Ryfiak (Rockford, Mich./Rockford) finished a rebound from close range, with fellow rookie Jenny Fassbinder (Hudson, Wis./Hudson) picking up an assist on the goal.  For Fassbinder, it marked her first career point in the Crusader kit.

"We were able to get the early goal today, which we talked about needing that," said Marovich.  "We had a good run of play early on, but then Saint Mary's changed its system a bit, forcing us to deal with something new.  Then they came out a bit differently in the second half as well, forcing us to make more adjustments.  That's the purpose of these games, to put ourselves in situations where we see different things, and I feel that was an important thing that came out today - that we were able to handle all the different looks we saw."

Junior Kristen Manski (Saint Charles, Ill./North) had to make just three saves in earning her sixth clean sheet of the season, lowering her season GAA to 0.59.  Manski and the Crusader defense have surrendered just one goal in the last five games.  Khalya Johnes made two saves in goal for the Gaels.  Saint Mary’s held a narrow 13-11 edge in shot attempts, but the Crusaders earned six corner kicks to the Gaels’ three.

"I thought Kelsey Draper did an outstanding job in the midfield all weekend," said Marovich.  "Kristen had two nice saves today, handling a couple hard shots well.  We're looking forward to getting the team home and getting ready for league play to start next week."

Valparaiso (6-3-1) returns to the Midwest to kick off Horizon League play next time out, traveling to Cleveland State next Friday, Sept. 28.  Kickoff is slated for 6 p.m. CDT, with live stats available through www.valpoathletics.com.