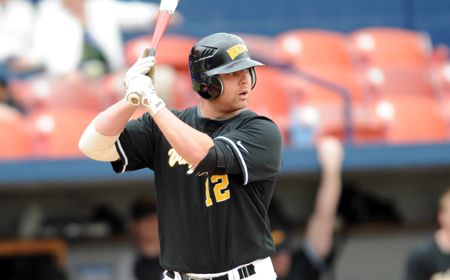 It is just past the midway point of the summer baseball season and several current and incoming members of the Valparaiso University baseball team have been busy playing in various summer collegiate leagues around the country.  Most notably, three members of the Crusader baseball team have been honored this summer by earning All-Star selections in their respective summer leagues.

Gaedele is tied for second in the Northwoods League with five home runs and his .327 batting average ranks eighth.  He currently leads the Madison Mallards in five categories, including at-bats (150), runs (28), hits (49), and triples (four), while leading the entire NWL in total bases (78).  Gaedele is off to a fast start in July as he’s already posted a .348 average (16-for-46) with four home runs and seven RBI through the month’s first 11 games.  Earlier this season he posted a 16-game hitting streak that is still tops in the NWL.

Robinson is also having a productive summer season catching for the Mankato Moondogs of the NWL.  He ranks eleventh in the league with a .323 batting average and a .403 on-base percentage.  Robinson has four doubles and nine RBI.

Martin has led the Lombard Orioles into first place in the CSBL with a record of 15-3.  Martin currently is batting .340 with 10 stolen bases, 16 runs, and seven RBI.  In the All-Star game, he was the North Team’s starting shortstop going 2-for-3 for the night.

An additional 12 Crusaders are also involved in various summer leagues around the country and putting up some impressive numbers as well.

Senior left-handed pitcher Jon Gulbransen (Appleton, Wis./Fox Valley Lutheran H.S.) is pitching for the first place Licking County Settlers of the Great Lakes Summer Collegiate League.  Gulbransen, who is 2-1 with a 3.25 ERA, has 20 strikeouts in 27.0 innings while giving up only seven walks.

Rising senior right-handed pitcher and Chicago Cubs draft pick Bryce Shafer (Wabash, Ind./Northfield H.S.) is pitching for the Wisconsin Woodchucks of the Northwoods League.  Shafer is 1-2 with a 3.74 ERA in 21.2 innings pitched, striking out 24 batters while only walking seven.

Rising senior right-handed pitchers Damon McCormick (Louisville, Ky./Saint Xavier H.S.) and Steve Godawa (Buffalo Grove, Ill./Buffalo Grove H.S.) are both pitching for the Wisconsin Rapids Rafters of the Northwoods League. Godawa has been especially impressive, leading the team with five saves and recording a 3.27 ERA.  McCormick has started for the Rafters six times and has pitched a team-high 35 innings.  He currently has a 5.91 ERA, 26 strikeouts and has only walked nine.

Rising juniors Steven Scoby (Delton, Mich./Kellogg H.S.) and Tyler Deetjen (Saint Charles, Ill./East H.S.) are both playing for the Staunton Braves of the Valley Baseball League.  Scoby ranks third on his team with a .293 batting average with five doubles, one triple, one home run, and 18 RBI.  Deetjen, who is currently pitching in relief, has a 5.66 ERA with 20 strikeouts in 20.2 innings pitched.

Sophomore infielder/right-handed pitcher Karch Kowalczyk (Peru, Ill./La Salle-Peru H.S.) and junior left-handed pitcher/designated hitter  Will Hagel (Arlington Heights, Ill./Prospect H.S.) are both playing for the Dodge City A’s of the Jayhawk Baseball League.  Kowalczyk is leading his team in the field and on the mound.  He ranks eighth in the league with a .364 batting average and leads the league in pitching with a 0.77 ERA in 12.2 innings pitched, only giving up one earned run while striking out 10 batters.  Hagel is seeing limited action in the designated hitter role posting a .260 batting average with two home runs.

Another rising senior, Ryan O’Gara (Buffalo Grove, Ill./Buffalo Grove H.S.), is playing for the DeKalb County Liners of the Prospect League.  O’Gara has a .259 batting average with three doubles and seven RBI.

Rising senior outfielder David Klein (Aurora, Ill./Oswego East H.S.) is playing for the Oswego Cats of CSBL and is leading his team with a .412 batting average.