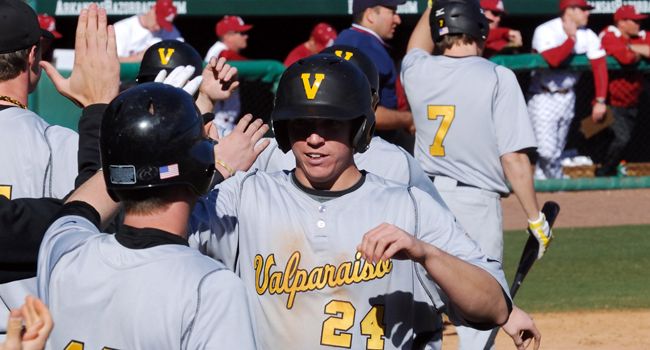 Hagel had a two-run single in the opening inning and added a bases loaded triple to straight away center field in the fifth on his way to a five-RBI day.  Yoder brought home two runs in the first with a single, blasted a solo home run, the first of his collegiate career, in the sixth, and plated another run on a fielder’s choice in the eighth.

Valpo struck first with four runs in the opening inning, taking advantage of two walks and a hit batsman.  Hagel and Yoder delivered the key hits.  The Crusaders added two more runs in the second inning, one on a bases loaded walk by John Loeffler (Burnsville, Minn./Burnsville H.S.) and another on a fielder’s choice off of the bat of Chris Manning (Lake Forest, Calif./El Toro H.S.).

“We did a good job early of taking advantage of a couple of their mistakes and the walks,” head coach Tracy Woodson said after the game.

Grace (12-17) cut the Valpo lead to 6-5 in the fifth, batting around in the inning.  Six hits, five singles and a RBI triple by Derek Zwier, pulled the Lancers within a run.

“They swung the bats well,” Woodson added of the Lancers’ 12-hit attack.  “We allowed them to stay in the game which is something we just can’t do.  These are tough games to stay focused on.”

Valpo answered with three in the bottom of the inning on the bases clearing triple by Hagel and added another run in the sixth on Yoder’s round-tripper.  The Crusaders added their final two runs in the eighth on the Yoder fielder’s choice and a sacrifice fly off of the bat of Steven Scoby (Delton, Mich./Delton Kellogg H.S.).