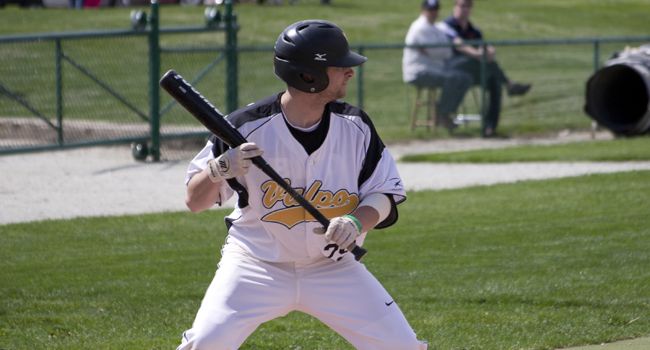 This Week in Crusader Baseball: Tied for first place in the Horizon League standings with just under two weeks to play in the regular season, Valparaiso continues its nine-game homestand this weekend with a key three-game conference series against UIC at Emory G. Bauer Field.

On the Air: Friday’s game will not be carried over the air or online.  Saturday’s and Sunday’s games can be heard live on WVUR (95.1-FM, Valparaiso) as well as online at valpoathletics.com.   Live stats will be available through valpoathletics.com for each game this weekend as well.

Head Coach Tracy Woodson: Tracy Woodson, the 16th head coach in Valparaiso University history, is in his sixth season at the helm of the Crusaders and has a 147-178 (.452) record both for his career as well as at Valpo.  Woodson ranks third in school history for career wins by a head coach.  A member of the Los Angeles Dodgers 1988 World Champion team, he has also managed in the minor leagues through the AAA level.

Series Notes: Valparaiso and UIC have met on the diamond 98 times prior to this weekend dating back to 1977.  The Flames hold a slim 52-46 advantage in the series but the Crusaders have won seven of the last nine meetings between the two schools. Valpo won the previous series this season two games to one April 5-7 in Chicago.

Wrapping Up Recent Action: Three Crusader hurlers combined on a three-hitter on Tuesday afternoon as Valpo defeated North Central 8-0 to open this nine-game homestand.  On Wednesday, Will Hagel delivered the game-winning single in the 10th inning and Will Robinson carried a no-hitter into the seventh as Valpo defeated Ball State 3-2.

Scouting UIC: The Flames have dropped seven straight games and 16 of their last 21 overall after falling 11-4 at #14 Purdue on Wednesday afternoon. Alex Grunewald leads UIC batting .324 on the season while Jon Ryan is hitting .306 with a team-leading four home runs and 32 runs batted in.  The Flames are hitting .261 as a team this year.  UIC’s pitching staff has posted a 5.94 earned run average and opponents are hitting .312 against them.

Streaking: Valpo enters the weekend having won three straight contests and 19 of its last 22 games overall.  The Brown and Gold have won seven in a row at home and the Crusaders have won 11 of their last 12 Horizon League games.  Valpo had its nine-game overall winning streak snapped last Sunday at Wright State, a streak that at the time was the fifth longest active streak in the country.

Staff Strong Midweek: Valpo’s pitching staff allowed just two runs and seven hits in its two midweek games this past week.  Three freshmen hurlers combined on a three-hit shutout on Tuesday against North Central while Will Robinson took a no-hitter into the seventh against Ball State on Wednesday.

Bonus Baseball: Valpo played its 10th extra inning game of the season on Wednesday against the Cardinals.  The Crusaders are 6-4 this year in bonus baseball.

Playing Small Ball: The Crusaders ranked fifth in the country entering the week with 67 sacrifice bunts, a total that has grown to 72 after the pair of midweek contests.  Tanner Vavra ranks fourth individually with 19 sacrifice bunts on the year.

Senior Day Set: Valpo will honor its six-member senior class prior to next Saturday’s regular season finale against Youngstown State.  Bobby Martin, Steven Scoby, Will Hagel, Jarad Miller, Kevin Wild, and Tyler Deetjen will all be recognized for their contributions to Valpo baseball.

Hagel Earns College Baseball 360 Honor: Will Hagel was named a College Baseball 360 Primetime Performer after he hit safely in all four games last week.  He batted .467 (7-for-15) with four runs scored and four runs batted in against Notre Dame and Wright State.  The fifth-year senior had a double in each game of the weekend series against Wright State, driving home three in the opener, and posted a .556 on base percentage for the week drawing two walks and being hit by a pitch in addition to his seven hits.

Horizon League Race Tightens: Valparaiso pulled into a tie for first place with Wright State after winning two of three games from the Raiders last weekend in Dayton.  More importantly, the Crusaders have a 4.5 game lead over Milwaukee with six to play in the race for the first round bye in the Horizon League Tournament, which goes to the top two finishers in the regular season.

Best Finish Ever Locked Up: Valpo can finish no worse than third place in the Horizon League, which marks the Crusaders’ best conference finish since joining the league prior to the 2008 season.  Valpo finished sixth in its first year in the league before placing fourth each of the last three seasons.

Wild Continues to Shine on the Mound in Conference Action: Kevin Wild is 5-2 with a 1.67 ERA and three complete games against conference teams this year.  He has held conference foes to just a .183 batting average and has struck out 38 in 64.2 innings of work.

Pitching Staff is Solid: Valpo’s pitching staff leads the Horizon League with a 3.46 ERA this season, including a 2.96 mark in conference play.  All three of Valpo’s weekend starters (Tyler Deetjen, 3.81, Kevin Wild, 2.39, and Kyle Wormington, 3.39) have ERAs that rank in the top-five in the Horizon League.

Leading After Eight: Valpo is a perfect 20-0 this season when taking a lead into the ninth inning.

No Free Passes Here: Valpo’s pitching staff ranks 11th in all of NCAA Division I through May 6 allowing just 2.41 walks per nine innings of work this year.  Individually, Tyler Deetjen ranks third in the country with a 0.62 walk per nine inning rate, having issued just six free passes in 87.1 innings of work.  Deetjen also ranks fifth in the country with a 8.5 strikeout-to-walk ratio.

Quick Games: Valpo has played 19 games in 2:15 or less this season and 34 in under 2:30.  The Crusaders are averaging just 2:19 for their nine-inning games this year, and 2:28 overall, including two four-hour plus games of 15 and 16 innings.  Four times this year the Crusaders have played under four hours.

This and That: John Loeffler has reached base safely in 23 consecutive games ... Will Hagel has hit safely in six consecutive contests ... Andrew Bain has 21 multi-hit games in 47 appearances this year ... Elliott Martin is batting .372 in Horizon League action with 28 runs batted in ... Valpo has played 25 one run games (13-12) ... Tanner Vavra leads the Crusaders batting .318 on the year ... opponents are batting just .269 against Valpo pitching this season.