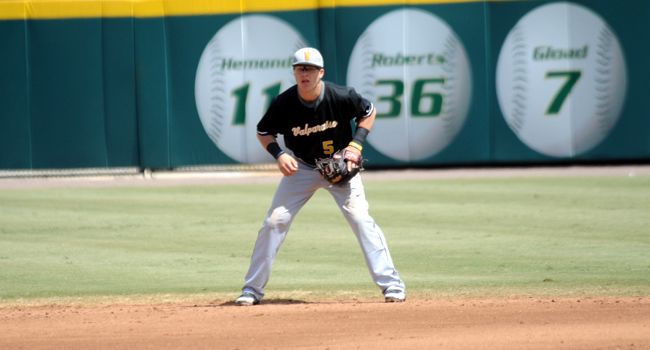 Tanner Vavra was one of the three Crusaders to speak with the media Thursday at Bart Kaufman Field. (Dave Schofield)

"First of all, we are very excited to be here in Bloomington. I just wanted to make sure I addressed what it’s going to be like to be back to the tournament again this year. It’s going to be extremely different.  We have a little bit of seniority now. We’ve got the jitters gone after being in the tournament for the first time in 44 years last season. I think you’re going to see a much more confident team," Woodson opened.

When asked about the difference between this year's team and the 2012 club, Woodson mentioned experience as a big factor.

"The guys are very loose. I can tell when guys are very uptight and stuff, and we have guys with a lot of confidence. We have got guys who can play the game. I’m hoping you’re going to see something better than a four seed this weekend," Woodson said.

Vavra had perhaps the best line of the day. When asked what adjustments the Crusaders would need to make in facing the Hoosiers' #2 (RHP Aaron Slegers) instead of their ace (LHP Joey DeNato):

"From a hitting standpoint, the biggest thing we have noticed is that he throws with his right arm instead of his left. We’re just going to focus on that," Vavra noted.

Webb was asked about his game plan going into a matchup against one of the better offenses in the country.

"It’s a good lineup. It’s the Big Ten Champions, but at the same time it’s not going to change what type of pitching I am going to do or we as a pitching staff are going to do. We just need to hit our spots and focus on our game plan and not let any of the outside circumstances affect us," Webb concluded.

First pitch will be at 7:05 pm ET/6:05 pm CT Friday night. Jim Barbar and Rusty Ensor will have the call on ESPN3.