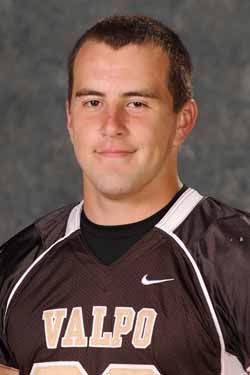 2013: Played in all 11 games for the Brown and Gold at linebacker...tallied two stops in the season opener at North Dakota (Aug. 29)...notched a season-high three stops versus William Jewell (Sept. 14)...recorded two tackles in the Valpo's 49-42 overtime win over Campbell (Sept. 28) on homecoming...made a tackle at Marist (Oct. 5)...assisted on a stop at Drake (Oct. 26)...registered two solo tackles at Butler (Nov. 9)...named to PFL Academic Honor Roll.

2012: Appeared in all 11 games for the Crusaders including one start as a linebacker...made his collegiate debut at Youngstown State on Sept. 8th where he made two tackles...recorded a season-high four tackles against Duquesne (Sept. 15)...tallied two stops at San Diego on Sept. 22nd...named to Pioneer Football League Honor Roll.