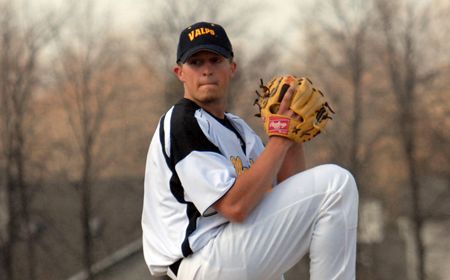 Jon Gulbransen (Appleton, Wis./Fox Valley Lutheran H.S.) tossed seven scoreless innings in the opener for Valparaiso to lead the Crusaders to a doubleheader split with Cleveland State on Saturday afternoon at Pipe Yard Stadium in Lorain, Ohio.  Valpo won the opener 10-5 but fell 7-6 in the night cap when a late ninth inning rally fell just short.

Gulbransen scattered just two hits in his seven innings of work and walked just one while striking out six to earn the victory (4-3), his fourth of the season, and already surpassing his total number of wins from all of 2008.

“Gulbransen was the story in the opener,” head coach Tracy Woodson said.  “He was lights out.  Unfortunately we needed four relievers to finish out the game.”

The Crusaders opened the scoring in the third inning, scoring twice with two outs.  Ryan Shober (Inverness, Ill./Fremd H.S.) tripled to the right-centerfield gap.  After a walk and a hit batter loaded the bases, Matt Lenski (Milwaukee, Wis./Marquette University H.S.) drew a base on balls to force in Shober.  Dan DeBruin (Combined Locks, Wis./Kimberly H.S.), then scored from third on a wild pitch.

In the seven, Valpo took advantage of more walks.  A bases loaded free pass to Shober plated Steven Scoby (Delton, Mich./Kellogg H.S.) and moved around to third on two other walks.  Andrew Quinnette (Kokomo, Ind./Kokomo H.S.) then came across the plate on a passed ball.

RBI singles by Scoby and Quinnette in the eighth inning increased Valpo’s lead to 6-0 when Gulbransen left the game and the Crusaders went to the bullpen.  A lead-off homer by Tyler Winn started a four run inning by the Vikings to close within two.  Two wild pitches and a groundout plated the other three runs in the inning, before Jarad Miller (Fort Wayne, Ind./Carroll H.S.) came on to slam the door.

Valpo got the four runs back in the top of the ninth for insurance, including a run-scoring double by Kyle Gaedele (Arlington Heights, Ill./Rolling Meadows H.S.) and a two-run double by Quinntte.  Miller then got the final three outs in the ninth to complete his sixth save of the season.

Josh Hungerman (2-4) suffered the loss for Cleveland State in the opener, working six innings while giving up four runs, three of which were earned, on just two hits.  He walked five and struck out nine.

Game two saw Valpo jump out to a 3-0 lead, but commit five errors in the game, and despite a ninth-inning rally, the Crusaders fell one run short.

Quinnette opened the scoring in the top of the first with his first homerun of the season to leftfield.  The Crusaders added two more runs in the fourth as Billy Cribbs (Rochester, Mich./Rochester H.S.) sacrifice fly plated Gaedele and a single by Shober scored Scoby.

A homerun by Tom Carter to lead off the bottom of the fourth put the Vikings on the scoreboard, and the hosts would score three more times in the inning.  Following a Valpo error, Josh Lowe’s two-run double put Cleveland State on top 4-3.  Two more runs, including another unearned tally, in the fifth increased the advantage to three, and Wynn’s second homer of the day leading off the eighth gave the Vikings a 7-3 lead heading into the ninth.

The Crusaders tried to rally in the ninth, but left the tying run on second.  Kyle Muhlsteff’s (Yorba Linda, Calif./Esperanza H.S.) single plated Shober with the first run of the inning and the Crusaders added a second on a bases loaded double play.  Gaedele doubled off the leftfield wall to score Muhlsteff, and following an intentional walk, Drew Fronczek induced a fielder’s choice to end the game and earn his third save of the season.

Anthony Sambula earned the victory (1-2) in relief for Cleveland State, pitching 4.2 innings while allowing three runs and six hits.  Alex Berry (Olney, Ill./East Richland H.S.) went the distance for the Crusaders in the loss (1-4), allowing seven runs, only four of which were earned, and 10 hits while fanning six.

Shober and Quinnette had two hits each for Valpo as the Crusaders tallied 10 in the night cap as well.

“This was a disappointing loss,” Woodson said.  “We had a 3-0 lead and then we gave the runs back with mental mistakes and errors.  We tried to come from behind, but it was too late.”

Valparaiso (10-13, 5-3 Horizon) and Cleveland State (8-16, 1-4) will play the rubber game of the weekend’s three-game set on Sunday at Pipe Yard Stadium to make up Friday’s game which was postponed due to rain.  First pitch is set for 11 a.m. CDT.