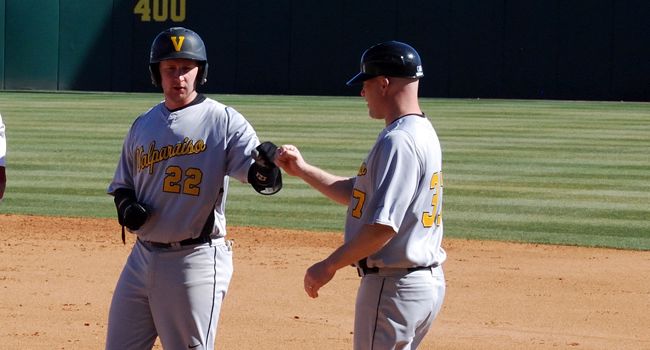 Billy Cribbs (Rochester, Mich./Rochester H.S.) infield single in the top of the 15th drove home Chris Manning (Lake Forest, Ill./El Toro H.S.) with the winning run after Valparaiso tied the game in the ninth inning, and the Crusaders defeated UIC 8-7 to take the opener of a three-game series at Les Miller Field in Chicago, Ill.

“I thought this was probably our best battle of the year for the longest time,” head coach Tracy Woodson said after the game. “We showed a lot of guts tonight.”

Manning singled with one out, stole second, and moved to third on a flyout.  Cribbs then delivered the game-winning hit, which pitcher Charlie Hoffman got a glove on and deflected towards short.  Cribbs beat out the throw to put the Crusaders on top.

Valpo trailed 7-6 heading into the ninth inning before forcing extra baseball.  Andrew Bain (Indianapolis, Ind./Park Tudor H.S.) was hit to lead off the inning and moved to second on a bunt.  Will Hagel (Arlington Heights, Ill./Prospect H.S.) laced a single to left to put runners on the corners and Elliott Martin (Irvine, Calif./University H.S.) singled up the middle to tie the game.

“Our at bats from the sixth, seventh inning on were great,” Woodson added.  “With the cold, the wind, and the elements we played great.  Overall it was a solid game.  We were being aggressive and got thrown out at some bases, but I have no problem with that.”

Neither team would score again until the 15th as Hoffman went 7.1 innings of relief for UIC before suffering the loss (0-1).  Jarad Miller (Fort Wayne, Ind./Carroll H.S.) tossed five innings of scoreless relief for the Crusaders before giving way to Zack Walsh (Batesville, Ind./Batesville  H.S.), who went the final three innings to earn his first collegiate victory (1-1).  Miller gave up just three hits while Walsh surrendered just one.

Walsh and Miller were huge for us,” Woodson stated.  “They both pitched great.  I told the team after the game we would need someone else to step up tomorrow.”

The Crusaders had chances to win earlier in extra innings putting a runner on third in both the 11th and 12th before coming up empty.

Manning took the lead in the opening inning as Manning singled home Hagel and Martin with two outs.  A double by John Loeffler (Burnsville, Minn./Burnsville H.S.) that got through the infield increased Valpo’s lead to 3-0 before UIC got a run back in the fourth.

Alex Lee delivered a two-out double to put the Flames on the board.  In the sixth, Jon Ryan had a double to pull UIC within 3-2 before Lee came through with a two-out two-bagger to tie the game.  Alex Grunenwald followed with a single and UIC had the lead.

Valpo answered in the seventh with a RBI single by Steven Scoby (Delton, Mich./Delton Kellogg H.S.), only to see UIC retake the lead with a pair of runs in the bottom of the inning.

Manning came through with a sacrifice fly in the eighth and Grant Yoder (Fort Wayne, Ind./Snider H.S.) added a RBI single to tie the game at six.

The Flames answered with a two-out single by Alex De LaRosa, giving the hosts the lead into the ninth, only to see the Crusaders force extra innings.

Hagel finished the night 4-for-7 at the plate while Manning went 3-for-6 with three runs batted in.  Valpo finished the game with 15 hits.  Lee went 4-for-7 for UIC while De LaRosa added three hits as part of the Flames’ 15-hit attack.