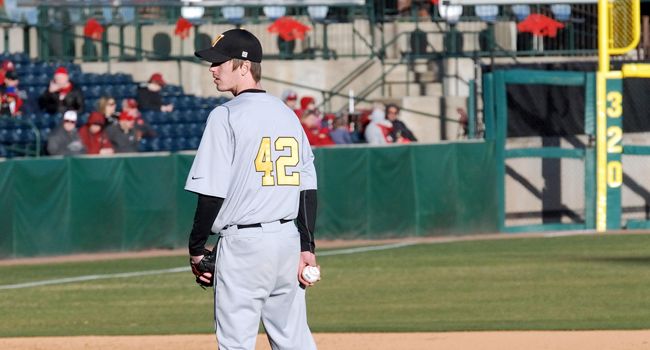 Valparaiso got solid pitching and some timely hitting on Tuesday afternoon as the Crusaders wrapped up their brief two-game homestand with a 6-2 victory over Western Michigan at Emory G. Bauer Field to earn a split in the season series between the two schools.

Will Robinson (Placentia, Calif./Valencia H.S.) earned the victory (2-2), allowing just two runs, only one of which was earned, and scattering four hits while striking out five.  Zack Walsh (Batesville, Ind./Batesville H.S.) and Jarad Miller (Fort Wayne, Ind./Carroll H.S.) pitched the final three innings of scoreless relief as the Crusaders avenged a ninth-inning loss to the Broncos last Tuesday.

“Will threw the ball well today,” head coach Tracy Woodson said afterwards.  “He got ahead of hitters early in the game.  Zack came on for us and continued to throw the ball well.”

Western Michigan (14-15) scored first with an unearned run in the third, taking advantage of two Crusader errors in the inning as well as a wild pitch.  The Broncos added to the lead in the fourth on a sacrifice fly by Patrick Duncan, which plated Ryan McMillan, who led off the inning with a triple.

After Bronco starter Matt Nestor held Valpo scoreless for five innings, the Crusaders finally broke through against reliever Monty Porter, who ultimately was charged with the loss (0-1).  Two singles and an error loaded the bases before Billy Cribbs (Rochester, Mich./Rochester H.S.) drove home Valpo’s first run of the game with a sacrifice fly.  Bobby Martin (Crystal Lake, Ill./Prairie Ridge H.S.) followed with a run-scoring single and Steven Scoby (Delton, Mich./Delton Kellogg H.S.) earned a RBI when he reached on an error, giving Valpo a 3-2 lead.

“Bobby Martin stepped into the lineup today and got a couple of hits,” Woodson said.  “That was a good thing to see.”

Valpo added to its lead in the seventh.  Tanner Vavra (Menomonie, Wis./Menomonie H.S.) reached with a bunt single to reach base safely in his 17th straight game, and Elliott Martin (Irvine, Calif./University H.S.) added a one-out single.  After John Loeffler (Burnsville, Minn./Burnsville H.S.) was hit by a pitch, Chris Manning (Lake Forest, Calif./El Toro H.S.) brought home the Crusaders’ fourth run with a ground out.  Cribbs followed with a two-run single to right and the Crusaders had a 6-2 lead, which was more than enough for its bullpen.

“We swung the bats well late in the game,” Woodson added.  “We had four bunt hits today which is something we haven’t done lately.”

Andrew Bain (Indianapolis, Ind./Park Tudor H.S.) paced Valpo’s 11-hit effort with a 3-for-5 day while both Martins, Bobby and Elliott, had two hits each.

Valparaiso (12-17) has now won four of its last five games and will head to Eastwood Field in Niles, Ohio to begin a three-game weekend series against Youngstown State.  All three games, Friday through Sunday, can be seen live online through the Horizon League Network.  First pitch in Friday’s series opener against the Penguins is set for 2 p.m. CDT.