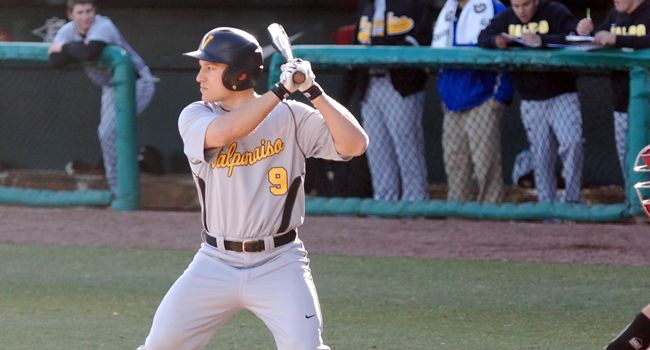 Wild scattered just five hits in the victory (3-1), while walking two and striking out two in the eight innings of work.  Over his last six starts the senior has allowed just 29 hits in 46 innings of work.

Valpo’s offense gave him an early lead to work with, scoring once in the second and five times in the third.  A two-out single in the second inning by Spencer Mahoney (LaGrange Park, Ill./Lyons Township H.S.) brought home Elliott Martin (Irvine, Calif./University H.S.).

The Crusaders batted around in the third inning.  Tanner Vavra (Menomonie, Wis./Menomonie H.S.) singled home the first run of the inning while Will Hagel (Arlington Heights, Ill./Prospect H.S.) followed with a run-scoring base hit.  Martin delivered a two-run double to make it 5-0 Crusaders as the first five batters of the inning all registered hits.  Martin scored on a sacrifice fly by Chris Manning (Lake Forest, Calif./El Toro H.S.), giving the Brown and Gold the six-run advantage.

“Anytime you score early you can give the pitcher a bit of confidence,” Woodson added.  “Our biggest problem has been scoring early and then letting teams back in the game.  Today we didn’t do that.  We did a good job of adding on.”

Valpo tacked on three more runs in the ninth to reach double figures for the fourth time this season.  Steven Scoby (Delton, Mich./Delton Kellogg H.S.) doubled home Manning in the ninth and Bain added a sacrifice fly.  Vavra came through with a double of his own to cap the scoring, plating Scoby.

The Penguins threatened in the ninth, loading the bases with no one out against Zack Walsh (Batesville, Ind./Batesville H.S.) but could not break up the shutout.

“I thought we were really good in all aspects of the game today,” Woodson stated.  “We swung the bats, pitched well and played defense.  We got out of a couple minor jams.”

Valpo finished the day with 11 hits with Vavra, Hagel, Martin, Mahoney, and Scoby all tallying two each.

You always want to take two out of three on the road but when you take the first two you have to be ready to come out and get the third one,” Woodson concluded.  “We hope to do that tomorrow.”