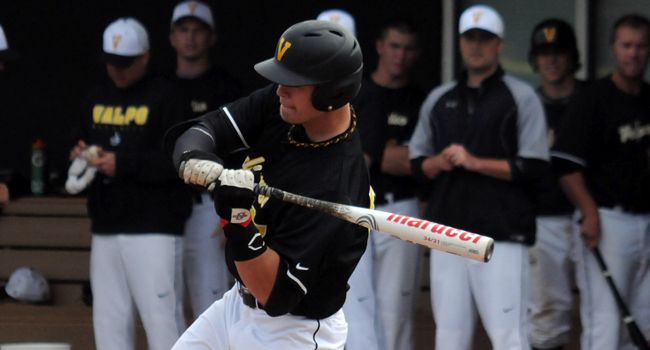 Grant Yoder (Fort Wayne, Ind./Snider H.S.) made his first appearance back to his hometown  a memorable one, launching a three-run home run in the top of the ninth inning to give Valparaiso an 11-8 victory over IPFW on Tuesday afternoon at Mastodon Field in Fort Wayne, Ind.

Yoder’s no doubt home run to right field capped a four-run ninth inning as the Crusaders rallied from deficits of 4-0, 6-3, and 8-5 to pull within one game of the .500 mark.

“Yoder was in a situation where it was a tie game and we were looking for a fly ball to get the run home,” head coach Tracy Woodson said afterwards.  “He got his pitch, made a great swing, and it was a no doubter.”

Trailing 8-7 heading into the ninth, John Loeffler (Burnsville, Minn./Burnsville H.S.) drew a leadoff walk.  Steven Scoby (Delton, Mich./Delton Kellogg H.S.) pinch ran for him and stole second and moved to third on a wild pitch.  Spencer Mahoney (LaGrange Township, Ill./Lyons Township H.S.) tied the game at eight with a hustle double into left-center.  After Billy Cribbs (Rochester, Mich./Rochester H.S.) singled to put runners on the corners with one out, Yoder delivered his second collegiate round-tripper.

Jarad Miller (Fort Wayne, Ind./Carroll H.S.) finished up the ninth to earn the victory (4-2).  He did not allow a hit in his three innings of work, striking out three, including the final out of the game.

IPFW (12-28) jumped on top in the second inning, sending 10 batters to the plate,  The Mastodons scored four times, including a three-run home run by Clay Hathaway.

Valpo responded with three in the third.  Yoder led off with a double and Andrew Bain (Indianapolis, Ind./Park Tudor H.S.) drew a walk.  After both runners moved up on a sacrifice bunt, Chris Manning (Lake Forest, Calif./El Toro H.S.) scored Yoder with a ground out.  Will Hagel (Arlington Heights, Ill./Prospect H.S.) drew a walk.  Loeffler singled to right-center to plate Bain and Hagel ended up scoring on a wild pitch, pulling Valpo within 4-3.

The Mastodons added two more runs in the bottom of the third before Mahoney came through with a two-run single in the top of the fifth to make it a one-run game again.

Carter DeBoe hit a two-run home run to right in the bottom of the fifth, giving IPFW an 8-5 advantage.

Valpo got two runs back in the seventh as Manning led off with a triple and Hagel followed with his fourth walk of the game.  Loeffler singled home Manning to pull the Crusaders within two.  The Crusaders loaded the bases and Yoder was hit by a pitch to bring home Hagel, making it a one-run game, setting the stage for Valpo’s comeback.

Yoder finished the game with four runs batted in while Mahoney drove home three and Loeffler brought home a pair.  The three freshmen each had two hits.

“It’s a good sign for what we have in the future when you have three freshmen step up with big hits in the ninth inning,” Woodson added.

Steve Danielak went 3-for-5 for the Mastodons, but was the losing pitcher (3-2), allowing the four runs in the ninth.

“I wasn’t happy with the way we played today,” Woodson said.  “It wasn’t our best effort, but we kept on battling back to keep the game within reach.  We’ve been in a lot of close games this year and didn’t panic late.”

Valparaiso (19-20), winners of four straight and nine of its last 10 and 11 of the last 13, will head to Milwaukee, Wis. Friday through Sunday for a three-game series with the University of Wisconsin-Milwaukee.  First pitch in Friday’s opener is set for 3 p.m.