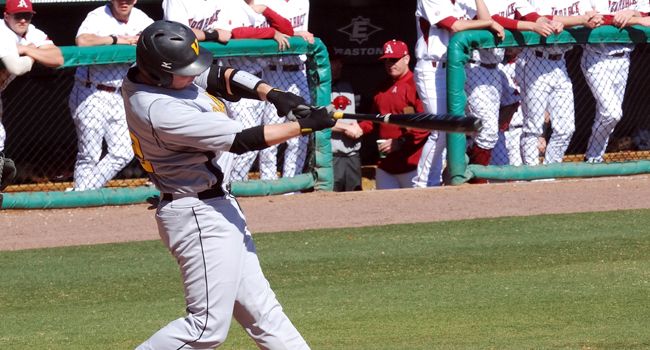 Every Crusader in the lineup had at least one hit on Friday afternoon as Valparaiso posted its 12th victory in its last 14 games to return to the .500 mark on the season with a 9-3 victory over Milwaukee at Henry Aaron Field in Milwaukee, Wis.

“Our offense really carried us today as we swung the bats well,” head coach Tracy Woodson said after the game.  “We got a few two out runs which is always big.”

Tyler Deetjen (Saint Charles, Ill./East H.S.) went seven strong innings, allowing just three runs, only one of which was earned, and nine hits to earn the win (4-2).  The southpaw struck out five and did not walk a hitter on the afternoon.

“Most of the hits Deetjen allowed were on fastballs,” Woodson added.  “He got most of his outs on off-speed stuff and got the job done.”

With the victory, Valparaiso is now 20-20 on the season, and has moved back to the .500 mark for the first time since starting the season 4-4 following a March 4 victory at Wofford.  The Crusaders are now 13-6 in Horizon League play.

Valpo jumped out to a quick 2-0 lead, taking advantage of a Milwaukee error in the opening inning.  Tanner Vavra (Menomonie, Wis./Menomonie H.S.) and Chris Manning (Lake Forest, Calif./El Toro H.S.) registered back-to-back singles with one out before Will Hagel (Arlington Heights, Ill./Prospect H.S.) loaded the bases after reaching on an error.  John Loeffler (Burnsville, Minn./Burnsville H.S.) was walked to force in the game’s first run and Elliott Martin (Irvine, Calif./University H.S.) plated another run with a fielder’s choice.

The Panthers scored in the second on a fielder’s choice by Michael Porcaro that scored Ryan Solberg, who doubled with one out, but Valpo answered that run with one of its own in the third.  Manning drew a walk and moved to third on a single by Hagel.  Loeffler grounded into a fielder’s choice allowing Manning to cross the plate, giving Valpo a 3-1 advantage.

Milwaukee (17-21, 10-9 Horizon) tied the game in the fourth, as Phil Striggow reached on an error and scored on a two-out double by Tell Taylor.  Porcaro followed with a hit as the Panthers knotted the game at three.

Again Valpo answered Panther runs, scoring twice with two outs in the top of the fifth.  Martin singled and Mahoney doubled before Billy Cribbs (Rochester, Mich./Rochester H.S.) brought home both runners with a single into right.

“I thought Cribbs hit was huge,” Woodson stated.  “I think that may have hurt them a little bit with us doing all of the damage in the inning with two outs after they tied the game.”

Valpo added one final run in the eighth on a sacrifice fly off of the bat of Steven Scoby (Delton, Mich./Kellogg H.S.), plating Martin.

While the Crusader offense was adding runs, Deetjen allowed just one hit over the final 10 batters he faced in the fifth through seventh innings before Sean Kennedy (Gurnee, Ill./Warren Township H.S.) came on to pitch the eighth and ninth innings, fanning three.

“Sean Kennedy has been big picking up innings for us lately,” Woodson added.  “He’s done a good job.”

Eric Semmelhack suffered the loss (3-6) for the Panthers, allowing five runs, three of which were earned, and 10 hits in five innings of work while walking four.

Game two of the three-game weekend series, slated for Saturday, has already been postponed due to forecasted rain and/or snow and temperatures in the 30s.  The two schools will wrap up the weekend series on Sunday with a doubleheader beginning at noon.