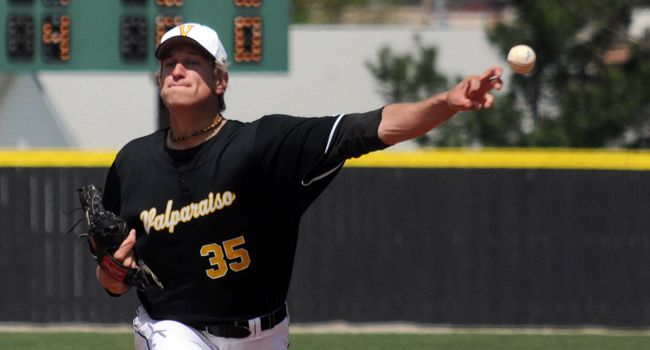 Valparaiso won its 30th game of the season for the first time since 1999 on Thursday afternoon, and in the process moved into a tie for first place in the Horizon League standings with an 8-3 victory over Youngstown State at Emory G. Bauer Field.

The Crusaders improved to 30-22 overall and 20-8 in the conference, pulling into a tie with Wright State for the top spot in the league with two games to play after the Raiders fell at Milwaukee 7-6 on Thursday afternoon.

“We got the job down today,” head coach Tracy Woodson said after the game.  “We have to be ready to come to play again tomorrow.”

Valpo jumped on top in the second inning as John Loeffler (Burnsville, Minn./Burnsville H.S.) doubled down the rightfield line, moved to third on a sacrifice bunt, and scored on a sacrifice fly by Spencer Mahoney (LaGrange Park, Ill./Lyons Township H.S.).

Tyler Deetjen (Saint Charles, Ill./East H.S.) sent the Penguins down in order in each of the first three innings before allowing a single to lead off the fourth.  In the fifth, with Valpo still leading 1-0, Youngstown State put runners on second and third with one out before Craig Goubeaux lined to Mahoney at short which turned into a double play.

The Crusaders added to the advantage in the fifth inning, sending 10 men to the plate while scoring five times.  Andrew Bain (Indianapolis, Ind./Park Tudor H.S.) singled with one out and moved to third when Tanner Vavra (Menomonie, Wis./Menomonie H.S.) reached on an error.  Chris Manning (Lake Forest, Calif./El  Toro H.S.) reached on a bunt single which scored Bain with the first run of the inning and Will Hagel (Arlington Heights, Ill./Prospect H.S.) followed with a triple to the gap in right-center with scored two.  After Elliott Martin (Irvine, Calif./University H.S.) was hit by a pitch to put runners on the corners, with two outs, Mahoney and Billy Cribbs (Rochester, Mich./Rochester H.S.) delivered back-to-back run-scoring singles, making it 6-0 Valpo.

“When we get a couple of hits it starts to become contagious,” Woodson said.  “I would like to see a few more four or five spots instead of having to scratch out runs.  I really think we have a solid lineup.”

Youngstown State plated a pair of unearned runs in the seventh, one on an error and another on a two-out double by Goubeaux.

Valpo answered with a run in the bottom of the seventh as Cribbs again delivered a two-run single, to score Martin.

“We need our guys at the bottom of the order to come through for us and Billy had two big hits with two outs today,” Woodson added.

Martin drew the third walk of the eighth inning to score Vavra for Valpo’s final tally.

The Penguins added a late run in the ninth on a solo home run by Marcus Heath.

Deetjen went eight strong innings to earn the win (6-2) in the senior’s final start at Emory G. Bauer Field.  He scattered seven hits and allowed just two runs, neither of which were earned.  He walked one and struck out three.

“Deetjen threw well again today for us,” Woodson stated.  “His big thing is getting the off-speed pitch over the plate and when he does he’s good.  He’s at the point now where his fastball then becomes effective.”

Vavra lead Valpo’s 14-hit attack with three hits, including a double, as five Crusaders tallied multi-hit efforts on the afternoon.  He also stole a pair of bases.

“Tanner had some good at bats,” Woodson added.  “He makes things happen for us and is dangerous on the bases because he is so alert.”