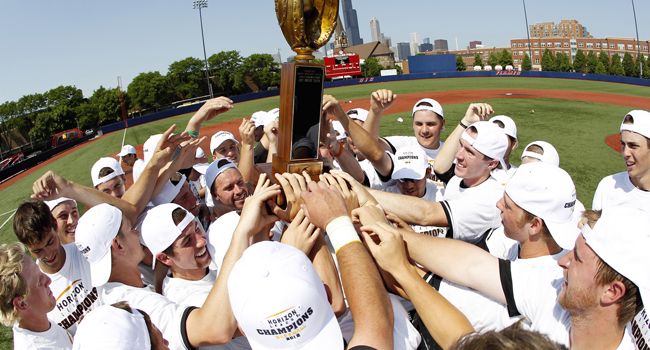 It has been 44 years since Valparaiso has been to a NCAA Division I (then University Division) Baseball Tournament, waiting one more day did little to damper the enthusiasm of the Crusaders on Sunday afternoon.  After falling to UIC on Saturday, setting up the “if necessary” game, the Crusaders exploded with eight runs in the bottom of the seventh inning to defeat the Flames 14-5 at Les Miller Field in Chicago, Ill. to capture the Horizon League Baseball Tournament title and with it the automatic bid into the NCAA Regionals which begin next weekend.

“What a great feeling,” head coach Tracy Woodson said after being doused with the cold water bucket on a hot day in the Windy City.  “All of the hard work that has been put in by the players and coaches has paid off.  Everyone deserves this.  The crowd support we had all weekend was incredible.  I’m especially thankful to all of the alums that showed up throughout the tournament to come support us.”

Valpo and UIC had split their first two meetings in the tournament, with the Crusaders winning 4-3 on Friday night before the Flames won Saturday afternoon by the same score to set up the final game.  UIC scored first in each of the first two games, but on Sunday, it would be the Crusaders to strike first.

“We talked about it before the game that we needed to put up a zero in their half of the inning and then score first,” Woodson said.  “Unfortunately, for a few innings we stopped scoring and they came back to take the lead.”

The Flames got on the scoreboard with a pair of runs in the third on a RBI triple by Joe Betcher and a run-scoring single by Jon Ryan.  Nick Addison tied the game at three, being hit by a pitch with the bases loaded before John Coen put UIC on top one batter later with a single to right.

That was all of the scoring that the Flames would do on the afternoon though, as Tyler Deetjen (Saint Charles, Ill./East H.S.) came on in the fifth inning.  He gave up the hit batter and the single, but kept UIC off of the board for the next three innings, pitching on short rest after starting, and winning Thursday night’s game against Youngstown State.

“I was worried when he (Deetjen) first came on,” Woodson stated.  “He came on with guys on base and starters don’t usually like to do that.  After he got out of that inning, he came out the next inning with the bases cleared and was really good.  He was huge for us today.”

Valpo answered immediately with three runs of their own in the bottom of the fifth.  Vavra and Manning were both hit by pitches to lead off the frame.  After two were out, Mahoney pulled the Crusaders within one with a single to center.  Johnson put the Brown and Gold on top for good with a line single off of the glove of the second baseman Coen, which plated two runners, as Mahoney came all the way around from first to score.

“You could tell the bullpen had logged a lot of innings and that caught up with them,” Woodson said of UIC using six hurlers on the afternoon.  “We took advantage.  The big innings are nice to get.  When you put up an eight spot it’s huge.”

Eight runs is exactly what Valpo posted in the seventh inning to break the game open.  Martin led off the inning with a blast to left for a solo home run.  Johnson followed with a single to left and moved to third when Billy Cribbs’ (Rochester, Mich./Rochester H.S.) fielder’s choice was thrown away for an error, putting runners on the corners.  Steven Scoby (Delton, Mich./Delton H.S.) followed with a RBI single to right-center, making it 8-5 Crusaders.

After Bain walked to load the bases, Vavra reached on an error which plated the ninth run.  With two outs and the bases loaded, John Loeffler (Burnsville, Minn./Burnsville H.S.) extended his hitting streak to 10 straight games and his on base streak to 33 straight, clearing the bases with a double.  Loeffler scored one batter later on Martin’s single and Mahoney made it 14-5 Crusaders with a triple to the gap in right-center.

UIC (23-34) loaded the bases in the eighth with one out, but Alex Lee grounded to Martin who started a double play from his knees after diving to stop the ball.  Jarad Miller (Fort Wayne, Ind./Carroll H.S.) came on to pitch the ninth, allowing a pair of singles to lead off the inning.  He then got Coen to fly into a double play, and when Jacob McNamara’s fly ball to left settled into Johnson’s glove, a mad celebration took place on the infield.

Johnson, the tournament’s Most Valuable Player, went 3-for-5 with four runs batted in on Sunday.  For the tournament he hit .400 with six runs batted in, including the game-winning hit in Friday’s game as well.  He drew five walks for a .684 on base percentage after coming in on Thursday night after Will Hagel (Arlington Heights, Ill./Prospect H.S.) was injured.

“He (Johnson) had some great at bats,” Woodson commented.  “We preach that the bench always needs to be ready.  He stepped in this weekend and was big.  He did it for us at Arkansas early in the year and did it again today.  That’s the type of guy we need coming off of the bench.”

Scoby also had three hits in the title game while Bain, Martin, and Mahoney added two each as part of a 14-hit attack.

Deetjen earned his second win (8-2) of the tournament, allowing just one run in 3.1 innings of relief.  He was named to the All-Tournament Team after posting a 1.59 ERA in 11.1 innings of work.

Mahoney, Loeffler, and Vavra were all named to the All-Tournament Team as well.  Mahoney, the shortstop representative on the team, batted .455 with seven runs batted in along with a .684 on base percentage.  Loeffler had three doubles and eight RBIs while hitting .412, and Vavra was the second base pick on the All-Tournament Team after batting .429.

Valparaiso (35-23) enters the NCAA Tournament having won 27 of its last 32 games overall.  The Crusaders will find out their regional opponents as well as the tournament site on Monday morning.  The selection show begins at 11 a.m. CDT and can be seen live on ESPNU.