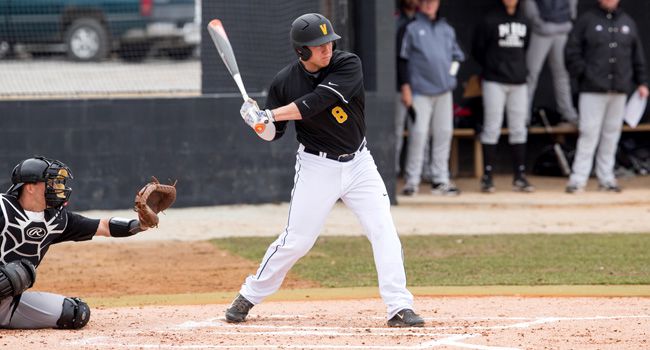 Karch Kowalczyk was 2-for-4 at the plate before recording a perfect ninth inning on the mound for Valpo on Sunday. (Jon Hendricks)
UIC Flames at Valparaiso | April 27, 2014

The Crusaders were unable to rescue the Sunday game of their series versus UIC, falling 6-3 to the Flames at Emory G. Bauer Field.

Unlike the first two games of the set, the Brown and Gold got on the board right away with a run in the 1st.

A Mickey McDonald RBI triple in the Flame half of the third knotted the game at 1-1.

The Crusaders immediately got the run back in bottom of the inning when command issues saddled UIC starter Jack Andersen. The sophomore walked two and hit a batter to load the bases. UIC skipper Mike Dee brought in reliever Mike Schoolcraft who struck out Karch Kowalczyk (Peru, Ill./La Salle-Peru) for the second out, but issued a walk to Nate Palace (Westlake Village, Calif./Oaks Christian) in the next at-bat to force in a run.

The 2-1 Valpo lead held up until the 5th when the Flames rattled off three consecutive two-out run-scoring hits off starting pitcher Ellis Foreman (Round Rock, Texas/Stony Point) for a 4-2 advantage.

Valpo added an unearned run in the 6th when Mark Johnson (Evanston, Ill./Evanston Township) delivered an RBI single to the right center gap. Reliever Mitchell Schulewitz entered the game with two outs and caught Mahoney looking for the third out to strand Jake Hanson (Yorkville, Ill./Aurora Christian) on third base. The Crusaders stranded nine overall in the contest.

Conor Philbin gave the Flames a three-run cushion with a two-run triple in the top of the 8th.

The tying run never reached the on-deck circle after that point as Schulewitz recorded perfect frames in the 8th and 9th for his third save of the season.