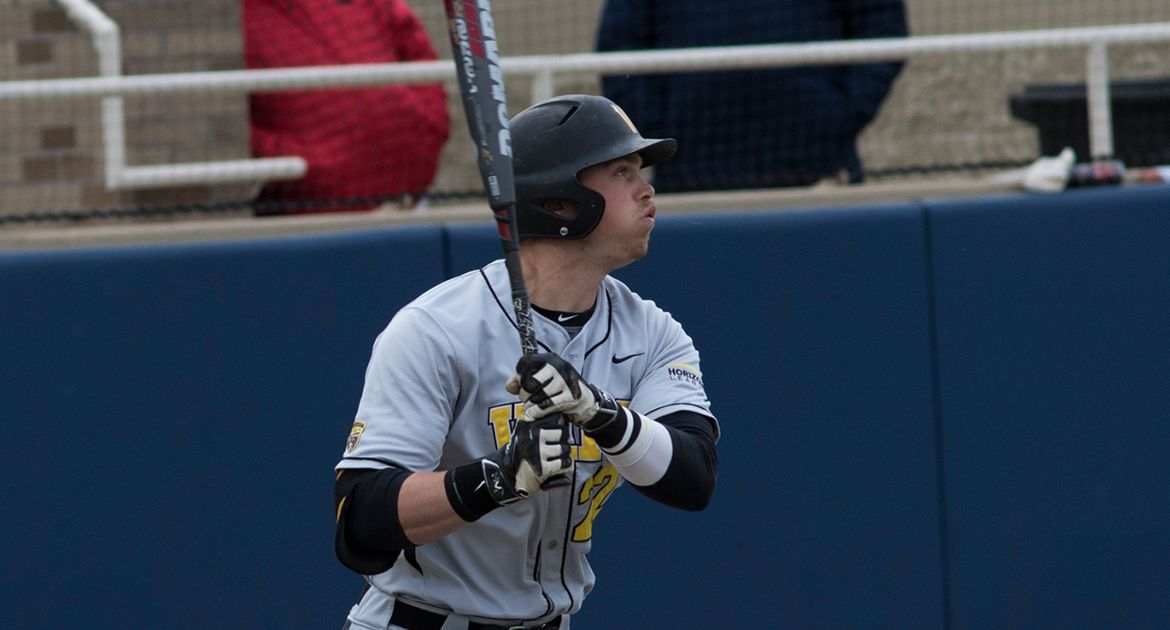 A rough week came to a disheartening conclusion Sunday at Emory G. Bauer Field for the Valpo baseball team. For the fourth and fifth times in the previous six days, the Crusaders saw leads erode as visiting Northern Kentucky came back for 12-4 and 9-4 wins.

Things got off to a promising start for the Brown and Gold in game one thanks to four first-inning runs.

The home run derby continued in the next half inning as NKU first baseman Trey Ganns led off the second with a homer to right-center field.

Valpo hurler Mario Losi (Anaheim, Calif./Canyon) protected his team's 4-1 lead until the visitor's half of the sixth. The frame opened with a soft fly ball to center that fell for an error. The Norse capitalized by following with a two-run homer and a pair of singles. Three batters later, Anthony Vagnier doubled home two. The Crusaders surrendered two more runs as NKU took a 7-4 lead after five and a half innings.

The Norse bullpen was stellar as it turned in seven shutout innings in relief of Miller. Valpo registered five hits in five innings against Seth Rosenberg, but the Brown and Gold weren't able to send a runner across the plate.

The Crusaders brought the tying run to the plate in the seventh, but couldn't break through. Nolan Lodden (West Des Moines, Iowa/West Des Moines Valley [Heartland CC]) opened the frame with a single. The outfielder went to third base on a double off the bat of Clark. Delaney, who had homered in the first game, was intentionally walked with two outs to load the bases. Rosenberg escaped the jam, however, when Jeff Edwards (Massillon, Ohio/Jackson)' liner to right field was speared by Mike Moffatt.

NKU added five runs off the Crusader bullpen to preserve the 12-4 triumph.

Clark finished the first game with a 3-for-4 line as he lacked only a triple for the cycle. Delaney reached base four times in five plate appearances. He was intentionally walked twice after his first-inning bomb. Lodden lifted his average to .361 by virtue of a 2-for-4 performance.

Valpo experienced another case of deja vu in the afternoon portion of the twinbill.

Clark drove in his sixth run of the week to give the Crusaders a 1-0 first-inning lead. Lodden raced home from third base on a sacrifice fly to center.

Patrick Donohue (Arlington Heights, Ill./Prospect) rewarded head coach Brian Schmack for inserting him into the starting lineup in the second game. He sliced an opposite-field RBI single in the home half of the second to score Edwards and expand the home team's lead to 2-0.

The lead quickly disappeared in the top of the third when a comedy of errors led to seven unearned runs scored behind starting pitcher Ellis Foreman (Round Rock, Texas/Stony Point). Four miscues helped the Norse send eleven men to the plate. With bases loaded and the score still 2-0, Ganns sent a chopper to first base. An errant throw came home, allowing Quint Heady to slide in safely. The ball ricocheted off the concrete backstop and created a rundown between third base and home. Tito Montgomery eluded the pickle, however, when the baseball was dropped in the midst of the rundown. The defensive hijinks tied the game at 2-2.

A Brad Bohlen RBI single granted Northern Kentucky a one-run edge before a knock off the bat of Anthony Vagnier resulted in three runs scoring. Clark came in from right field to scoop up the ball for a potential throw home. However, the ball got underneath his glove and trickled back towards the warning track while the Norse ran wild on the basepaths. Heady added a run-scoring double later in the frame to cap off the seven-run strike.

James Stea (Los Alamitos, Calif./Los Alamitos [Golden West]) got one of those tallies back in the fourth via a sac fly, but as was the case in the first game, the NKU bullpen kept the Valpo offense at bay in the latter innings.

Pat Kelley earned the win after throwing five innings of three-run ball. Justin Watts picked up the save after he allowed just one run over the game's final four frames.

The Crusaders committed five errors in the afternoon tilt, seven total on the day. It marked the third time this season that they've had a five in the error column.

Valpo (20-25, 11-11 Horizon) will be back at it Wednesday afternoon at home. Purdue (7-37, 2-19 Big Ten) will visit Emory G. Bauer for the second straight season. First pitch between the Crusaders and Boilermakers is slated for 3:00 pm CT. Links to the radio call and live stats are up at ValpoAthletics.com.