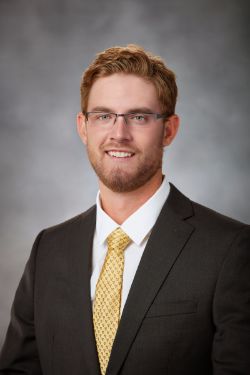 2015-16: Repeated as an All-Horizon League choice as a junior, earning First Team All-League accolades ... set a new program single-season scoring average record, recording a stroke average of 73.61 ... ranked fifth in the Horizon League in scoring average ... enters final season at Valpo as the program's career leader in scoring average as well ... posted two top-five finishes and five top-10s in his 11 events ... tallied seven rounds of par or better on the year ... shot a career-best round of 66 to close out The Firestone Invitational on Oct. 6, third-best in program history both in stroke count and in relation to par (-6) ... six-under round closed out a 54-hole score of 208 (-8), good for a tie for second place out of 91 golfers ... 208 and eight-under rank second all-time on the program's 54-hole scoring and score in relation to par charts, respectively ... moved into a tie for sixth place by stroke count and fifth place in relation to par with rounds of 70 and 76 (146, +2) at the Hoosier Collegiate at Otter Creek Apr. 9-10 ... registered second-place finish for the second time on the season Mar. 21-22 at the Twin Oaks Intercollegiate with a score of 216 (71-72-73) ... second-place finish at Twin Oaks Intercollegiate kicked off stretch of five consecutive top-15 finishes to close the year, including a ninth-place showing at the Wright State Invitational Apr. 4-5 (74-72-76=222) and a 13th-place finish at the Horizon League Championship Apr. 22-24 ... also posted two other top-10 finishes in the fall, closing out the Dayton Flyer Invitational (Oct. 19-20) in sixth place out of 100 golfers and the Whistling Straits Intercollegiate in 10th position ... shot second-best round of the season at the Golfweek Program Challenge Sept. 7, posting a 69 over the middle 18 holes ... member of Horizon League Academic Honor Roll ... named an All-America Scholar by the GCAA.

2014-15: Saw action in nine tournaments as a sophomore ... an All-Horizon League selection ... posted a scoring average of 74.25, second-best on the team and second-best in a single season in program history ... ranked ninth in the league during the regular season in scoring average ... named to All-Tournament Team at Horizon League Championship Apr. 24-26 after finishing in sixth place with a 54-hole score of 227 ... shot seven rounds of par or better on the year and had a trio of top-10 finishes ... shot an opening-round 68 as part of a 54-hole 217 at the Golfweek Program Challenge Sept. 7-9 ... 68 is tied for the sixth-lowest round in Valpo program history, while the four-under-par round is tied for fourth-best in relation to par ... finished in a tie for 10th at the Bash at the Beach Collegiate Invite Mar. 9-10 with a two-under score of 211 (69-72-70) ... moved into a tie for second in 54-hole overall score and a tie for fifth in relation to par with that effort ... named Horizon League Golfer of the Week Mar. 13 ... helped Valpo to team title at Wright State Invitational Apr. 5-6 with a third-place finish, posting a 54-hole score of 216 ... shot a final-round 68 to match his season-low round from earlier in the season ... member of Horizon League Academic Honor Roll.

2013-14: Appeared in 11 events during his first season as a Crusader … posted a scoring average of 75.0, second-best on the team and good for ninth in the Horizon League … named Horizon League Freshman of the Year … scoring average was the third-best in a single season all-time by a Crusader … opened career by shooting three rounds of par or better (72-71-71) to finish in a tie for 3rd with a 214 at the Battle of the Tetons … 214 is tied for the fourth-best 54-hole score in program history and is tied for third-best in relation to par … matched a program record with an opening-round 67 at the Golfweek Program Challenge - five-under-par round was the best in relation to par in program history … followed with a round of 68 and ended Golfweek tied for third with a 54-hole score of 211, the best tournament in relation to par and tied for the best by total strokes all-time at Valpo … earned Horizon League Golfer of the Week honor for his performance at the Golfweek Program Challenge … finished in 17th place at the John Piper Intercollegiate (221) … matched personal best and program record with a final round 67 at the Bash at the Beach, closing the tournament at 216 … earned second Golfer of the Week honor from the Horizon League following that event … finished in 13th position at the Horizon League Championship (229).

Prep: A four-year letterwinner for the Spartans ... First Team All-State honoree as a senior ... earned First Team All-Area accolades each of his final two seasons ... three-time First Team All-Conference honoree; was named Big 8 Player of the Year as a senior in 2013 ... two-time Madison City Player of the Year ... set school records for lowest scoring average (71.8) and most individual wins in a season (11) ... earned top-10 finishes in Wisconsin Junior PGA Championship in each of the last three years, including a fourth-place showing in 2012 ... tied for fifth at the WSGA Wisconsin State Junior in 2012 ... semifinalist in 2013 Wisconsin State Match Play.

Personal: Peter is the son of Tom and Carolyn Webb ... major is marketing.