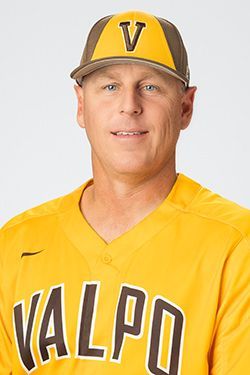 Brian Schmack finished his ninth season at the helm of the Valpo baseball program in 2022.

In July 2013, Schmack was named the 17th head coach in Valpo baseball history and just the sixth since 1946.

During the 2022 campaign, Schmack led his team to a successful pre-conference portion of the season. Valpo held its best record through 22 games since 1998. The early-season success featured road series wins over Omaha and UIC plus a four-game split at Murray State. The series win over the Flames marked the program’s first since 2012. During MVC play, Valpo earned a road series win at Illinois State, including the program’s most lopsided league win since joining The Valley, a 10-2 victory over the Redbirds.

Also in 2022, Schmack instructed Nolan Tucker, who earned Freshman All-American honors in addition to garnering All-MVC First Team status. Furthermore, pitcher Colin Fields cracked the program record book for strikeouts both in a single season (110, fifth) and a career (260, fifth). The right-hander led the MVC and ranked among the nation leaders in strikeouts.

During the 2021 season, Schmack led his team to its highest league winning percentage since joining the prestigious Missouri Valley Conference. The season culminated on a high note as Valpo won two games in the MVC Tournament for the first time since joining the league, besting Missouri State 6-4 in 10 innings and Illinois State 6-5 in the competitive event. The victory over Missouri State snapped a 13-game head-to-head losing streak and marked the program’s first-ever win over the Bears. Schmack’s squad was one of the final four teams standing in the tournament, joining a pair of NCAA Regional qualifiers in Indiana State and DBU plus a Southern Illinois team that enjoyed a 40-win season.

The 2021 campaign saw Schmack’s team have success despite featuring a youthful roster. The squad received 43 percent of its innings pitched from freshmen and 79 percent from either freshmen or sophomores. Offensively, 57.8 percent of the team’s at-bats were taken by freshmen and 68.1 percent from either freshmen or sophomores. The team debuted its new infield turf at Emory G. Bauer Field in style, sweeping a doubleheader from Southern Illinois with both wins coming in walk-off fashion. That marked the beginning of a 7-6 home record as the team finished with a winning mark at home for the fifth time in the last six seasons and 12th time in the last 14 campaigns.

Schmack’s pitching staff racked up 410 strikeouts in 2021, the team’s highest total since 2010. Colin Fields carved the eighth no-hitter in program history and first since 1992 on March 13 at Middle Tennessee, a 5-0 victory that included an immaculate inning. Fields, a two-time MVC Pitcher of the Week, finished the season with 81 strikeouts, the most by a Valpo pitcher since 2015. Under Schmack’s direction, Jon Tieman finished with 244 career strikeouts, seventh on the program’s all-time list. Under Schmack’s guidance, a pair of right-handed hurlers closed out their careers among the program’s all-time saves leaders: Easton Rhodehouse (11, fifth) and Jon Tieman (10, t-sixth). Rhodehouse was named All-MVC Honorable Mention during his senior season, while Tieman garnered MVC Scholar-Athlete Honorable Mention, his fourth straight season with a conference scholar-athlete honor. In addition, Schmack coached rookie infielder Kaleb Hannahs, who was the MVC Freshman of the Year and a Freshman All-American.

In 2017, Schmack had success despite guiding a youthful roster that featured 11 freshmen and 15 total newcomers after graduating 12 seniors in 2016. He led the team to 24 wins, including a strong finish to the regular season that saw the squad win eight of its last 11. Under Schmack's direction, three players earned Horizon League all-freshman team honors, two of whom were pitchers. That marked the first time Valpo had three players on the all-freshman team since 2013 and the seventh straight year Valpo had multiple players on the all-freshman squad. After posting a 4-1 record, 2.93 ERA and seven saves, right-handed pitcher Jon Tieman was named a Freshman All-American, becoming the first Valpo player to earn that high honor since shortstop Spencer Mahoney in 2012.

The 2017 season also saw Valpo set the program record for team fielding percentage, as they put together a .971 fielding percentage that bested the previous mark of .968, which had stood since 1998. Schmack picked up his 100th career victory on May 14, 2017, a 7-6 triumph over eventual Horizon League champion UIC, becoming the fifth head coach in Valpo history to reach the century mark.

Schmack pitched in professional baseball from 1995-2004 in the Chicago White Sox, Texas Rangers and Detroit Tigers organizations after breaking in with the Newark Bison of the Frontier League. In 2003, Schmack earned a promotion to the major leagues with the Tigers, appearing in 11 games and posting a 1-0 record with a 3.46 ERA.  He earned his first major league victory against Cleveland on Sept. 2, 2003. In May 2020, Schmack ranked 11th on Baseball America’s list of the head college baseball coaches with the best playing careers.