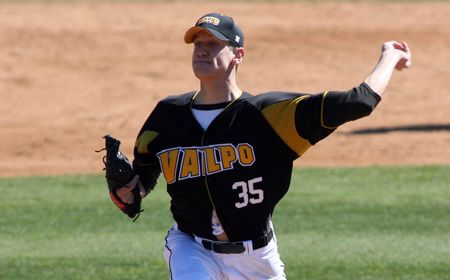 This Week in Crusader Baseball: After finishing runner-up in the Horizon League Tournament one year ago, Valparaiso returns to the diamond this weekend to open the 2012 campaign with a three-game series at Murray State.  The Crusaders look to get off to a quick start on the road, as the Brown and Gold will be away from home for 19 straight games to open the year.

Head Coach Tracy Woodson: Tracy Woodson, the 16th head coach in Valparaiso University history, is in his sixth season at the helm of the Crusaders and has a 120-157 (.433) record both for his career as well as at Valpo.  Woodson ranks fourth in school history for career wins by a head coach.  A member of the Los Angeles Dodgers 1988 World Champion team, he has also managed in the minor leagues through the AAA level.

Series Notes: Murray State won the only previous meeting all-time between the two schools, 5-3, on March 13, 1994 in Louisville, Ky. as part of the Derby City Classic.  All-time against current Ohio Valley Conference schools the Crusaders are 23-57-1.  Last year Valpo was swept in a three-game series at Austin Peay to open the year and split a pair of games against SIU Edwardsville.

Wrapping Up Last Year’s Action: Valparaiso finished 2011 with a 25-32 record overall and a 14-10 mark in the Horizon League.  The Crusaders finished the year fourth in the conference during the regular season, and placed second in the Horizon League Tournament in Dayton, Ohio.  Andrew Bain led Valpo with a .343 batting average while Will Hagel hit .328 with a team-leading 46 runs batted in.  Kyle Gaedele, who became Valpo’s highest MLB draft pick ever, selected in the sixth round by San Diego, batted .312 with seven homers and 39 runs batted in.  Justin Frane led the pitching staff with a 3-2 record and a 1.93 ERA.  Damon McCormick, who threw a team-high 114.1 innings, was 6-7 with a 3.38 ERA.  Both hurlers have since graduated.

Scouting Murray State: The Racers finished 2011 with a 19-32 record overall and a 9-13 mark in the Ohio Valley Conference.  Murray State has been picked to finish ninth in the OVC this season.  Brandon Elliott is the team’s top returning hitter, bating .384 last season with a .459 on base percentage.  As a team Murray State batted .306 on the season in 2011 while the pitching staff notched a 6.88 earned run average.

Valpo in Recent Openers: Last year the Crusaders were swept in a three-game series at Austin Peay to open the year.  The Crusaders have lost the season opener in back-to-back years with their last opening day victory coming Feb. 21, 2009, 6-5 at Morehead State.

Keep the Bags Packed: Valpo will play its first 19 games away from home before finally returning to Emory G. Bauer Field on March 23 to host Milwaukee.  Valpo’s travel has the Crusaders heading south after this weekend to play three games at Arkansas.  The Crusaders then will travel to Gardner-Webb, Wofford, and South Carolina Upstate for single games before facing Wake Forest for a two-game set and Campbell for a three-game series.  Single games at Winthrop and Belmont will also take place before opening Horizon League play March 16-18 at Butler.

In the Record Books: Jarad Miller returns for his fifth-year at Valpo after missing last year with an injury.  An All-American closer in 2009, his season was cut short in 2010.  Miller’s 28 career saves are a Crusader record, and 14 more than any other player in program history.

This and That: Valpo has 17 new faces on the roster this season, including 10 freshmen ... Will Hagel enters the season as Valpo’s top active hitter with a .321 career mark ... Valpo led the Horizon League in 2010 with a 3.93 staff earned run average ... coach Tracy Woodson was inducted into North Carolina State’s Baseball Hall of Fame on Thursday evening prior to arriving in Murray.