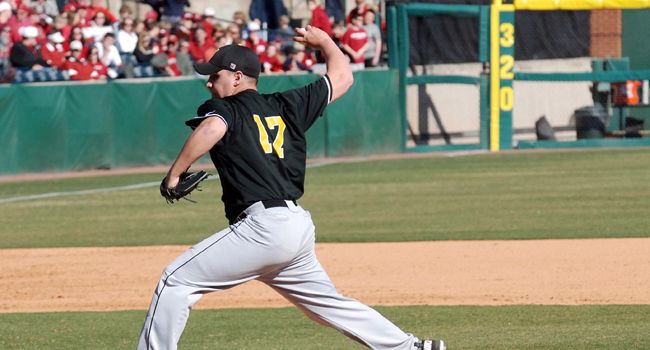 This Week in Crusader Baseball: Valparaiso heads to the Carolinas this weekend to begin their annual spring break trip.  The Crusaders will open play on Saturday at Gardner-Webb before heading to Wofford on Sunday.  Monday the Brown and Gold will travel to South Carolina Upstate to conclude the wraparound weekend slate.

Head Coach Tracy Woodson: Tracy Woodson, the 16th head coach in Valparaiso University history, is in his sixth season at the helm of the Crusaders and has a 123-160 (.435) record both for his career as well as at Valpo.  Woodson ranks fourth in school history for career wins by a head coach.  A member of the Los Angeles Dodgers 1988 World Champion team, he has also managed in the minor leagues through the AAA level.

Probable Starters: Senior Tyler Deetjen (LHP, 0-1, 4.26) will be handed the ball for the Crusaders against Garner-Webb.  The Bulldogs will counter with right-hander Conner Scarborough (RHP, 0-0, 2.00).  The middle game of the weekend will see Kevin Wild (RHP, 0-0, 7.00) toe the rubber for Valpo while Wofford has not announced a starter.  At South Carolina Upstate, Will Robinson (RHP, 1-0, 7.20) take the mound for Valpo while the Spartans will send Brandon Lee (RHP, 1-1, 3.00) to the hill.

Series Notes: Valparaiso holds a 2-1 series advantage all-time against Gardner-Webb, winning a three-game series March 12 and 13, 2010.  Valpo won the opener 7-5, fell in the middle game 9-4, and won the series finale 10-4 against the Bulldogs.  Valpo and Wofford have never met on the diamond.  The Crusaders and South Carolina Upstate will meet for the first time as well.

Wrapping Up Recent Action: Valparaiso played #4 Arkansas tough all three games last weekend.  The Crusaders dropped the opener 7-3 on Friday before falling 4-3 on Saturday.  In Saturday’s contest Valpo led 3-0 and also had the tying and go ahead runners on base in the ninth.  The Crusaders rallied from 5-0 down to defeat the Razorbacks 10-9 in 10 innings in Sunday’s series finale.

Scouting Gardner-Webb: The Bulldogs had their two-game winning streak snapped  on Wednesday with a 6-4 loss to Furman.  John Harris leads the team batting .444 with 10 runs batted in.  As a team Gardner-Webb is hitting .254 while the pitching staff has a 3.12 earned run average.

Scouting Wofford: The Terriers have dropped two straight following an 8-5 setback at Presbyterian on Wednsday.  Stephen Cantrell is batting .476 while Mac Doyle is hitting at a .448 clip.  As a team Wofford is batting .296 while the pitching staff has posted a 6.47 ERA.

Scouting South Carolina Upstate: The Spartans have won five straight after defeating Georgia State 4-1 on Wednesday afternoon.  Gaither Bumgardner is hitting .500 with 10 runs batted in while Dillon Way is batting at a .400 clip.  USC Upstate is hitting .313 as a team while the pitching staff has posted a 2.00 earned run average this year.

Vavra Named Hitter of the Week: Tanner Vavra was named the Horizon League’s Batter of the Week after hitting .583 (7-for-12) in the three-game series against the Razorbacks.  Vavra had a pair of three-hit performances and had at least one hit in each game of the series.  In addition, the junior posted a .667 on base percentage and was flawless in the field.

Slamming the Door: Ben Mahar has been solid in his first two appearances as a Crusader.  The freshman right-hander has not allowed a run and scattered just two hits in 5.1 innings of work while striking out five out of the bullpen.  He is 1-0 on the year with opponents batting .125 against him.  He tossed 2.1 innings of perfect relief, fanning three, in the middle game at Arkansas.

Hagel Breaks Out the Bat in the Series Finale: Will Hagel went 0-for-9 in the first two games of the series against Arkansas, snapping his 16-game hitting streak and 33-game on base streak, dating back to 2011.  He came through big in the finale though, going 4-for-6 at the plate with the game-winning single in the 10th inning.

Playing Defense: Valpo leads the Horizon League with a .978 fielding percentage through the first two weekends of play.  The Crusaders have committed just six errors in six games.

Winning in Extra Innings: Valpo had not won an extra inning game over the since April 10, 2010 until winning the season opener in 13 innings against Murray State 5-2.  The Crusaders had dropped six straight games in which bonus baseball was played prior to that win.  However, the Brown and Gold is already 2-0 this year after notching another extra innings win last weekend, 10-9, against #4 Arkansas.

Pitching Staff Getting it Done: After leading the Horizon League in 2011 with a 3.95 earned run average, the Crusader pitching staff has already returned to the top spot thus far this year.  Valpo’s hurlers have recorded a 4.13 ERA while limiting opponents to just a .262 batting average through six games.

Deetjen Named Pitcher of the Week: Tyler Deetjen was named the Horizon League’s Pitcher of the Week for the first weekend of play after his opening day performance.  The senior southpaw went seven scoreless innings allowing just four hits and walking one while striking out four.  He earned a no decision as Murray State rallied in the ninth, but Valpo still won the game 5-2 in 13 innings.

Keep the Bags Packed: Valpo will play its first 19 games away from home before finally returning to Emory G. Bauer Field on March 23 to host Milwaukee.  The Crusaders opened with three games at Murray State and three games at #4 Arkansas before heading to the Carolinas this weekend.  Valpo will stay in North Carolina after this weekend, traveling to Wake Forest for two games  before heading on to Campbell for a three-game set.  Single games at Winthrop and Belmont will also take place before opening Horizon League play March 16-18 at Butler.

This and That: Tanner Vavra has the team’s longest active hitting streak at four straight games ... Chris Manning has reached base safely in 12 straight games dating back to 2011 ... Vavra already has three three-hit games this season ... Will Hagel has a pair of multi-hit games.