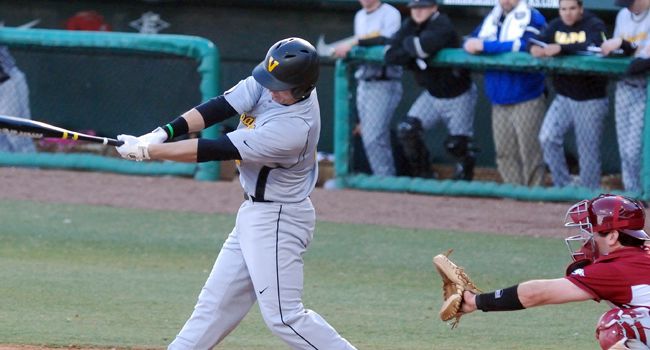 Valparaiso scored five times in the top of the eighth inning to rally from a four-run deficit and defeat Wright State 12-11 on Friday evening at Nischwitz Stadium in Dayton, Ohio.  With the win, the Crusaders have now won nine straight and have moved into a first place tie with the Raiders in the in the Horizon League standings.

After waiting out a one-hour, two-minute rain delay before the start of the game, the Crusaders rallied twice on the evening.  Valpo fell behind 3-0 before taking a 7-3 lead, and again 11-7 before rallying in the eighth.

“I’m ecstatic at the way we rallied a couple of times tonight and never gave up,” head coach Tracy Woodson said after the victory.  “I loved the level of excitement and exuberance from the guys at the end of the game.  It was just a great team win.”

Trailing by four heading into the eighth, the inning started with a leadoff walk to Billy Cribbs (Rochester, Mich./Rochester H.S.).  With one out, Wright State brought in closer Michael Schum, who promptly gave up four straight singles.  Andrew Bain (Indianapolis, Ind./Park Tudor H.S.) started with a single over first base to move Cribbs to third.  Tanner Vavra (Menomonie, Wis./Menomonie H.S.) followed with a single through the right side, scoring the first run of the inning.  Chris Manning (Lake Forest, Ill./El Toro H.S.) added a single through the right side as well, loading the bases, before Will Hagel  (Arlington Heights, Ill./Prospect H.S.) delivered a two-run single up the middle to pull Valpo within one, 11-10.

“We’ve seen him (Schum) enough and the guys knew how to approach him,” Woodson added.  “The guys just feed off of each other.  The excitement keeps going and the guys feel like they have a chance.”

After another Raider pitching change and a flyout, Elliott Martin (Irvine, Calif./University H.S.) tied the game with a looping single into right.  Spencer Mahoney (LaGrange Park, Ill./Lyons Township H.S.) put Valpo on top with a single the opposite way to left, scoring Hagel with what proved to be the winning run.  Schum was ultimately charged with the loss (3-2) in the game.

Jarad Miller (Fort Wayne, Ind./Carroll H.S.) pitched the ninth for his six save of the season.  He gave up a leadoff single and a two out walk before inducing a flyout from Zach Tanner to end the game.

Wright State wasted little time taking the lead in the game as Tanner homered as the game’s second batter.  Tristan Moore followed with a single, stole second, and scored on a two-out single by Garrett Gray to put the Raiders up by two.  An unearned run in the third on a RBI single by Ryan Ashe gave Wright State a 3-0 lead before Valpo found the scoreboard.

The Crusaders sent 11 men to the plate in the fifth inning, scoring seven times.  Steven Scoby (Delton, Mich./Delton Kellogg H.S.) led off the inning hitting his first home run of the season, a shot to right.  Bain followed with a single, but was forced at second on a bunt attempt by Vavra.  Manning drew a walk to put two runners aboard before Hagel delivered a run-scoring double to pull Valpo within a run.

With runners on second and third and one out, John Loeffler (Burnsville, Minn./Burnsville H.S.) hit a grounder to first.  Jake Hibberd came home with the throw, and Vavra was ruled out at the plate.  Upon appeal, the call was reversed though as Davis never applied the tag, tying the game at three.

“That was the key play in the inning,” Woodson said.  “The rest of the inning doesn’t happen if that call is not changed, and the umpires got it right.”

Martin followed with a run-scoring single to right, putting Valpo on top 4-3.  After starter Taylor Braun was replaced by Jordan Marker, Mahoney greeted the reliever with a single.  Cribbs added a base hit and Scoby followed with a sacrifice fly to put Valpo on top 7-4 midway through the contest.

The Raiders put together back-to-back big innings, scoring five in the sixth and three more in the seventh.  Five straight singles scored the first three runs before Kyle Mossbarger tied the game with a triple to dead centerfield.  A ground out by Hibberd put Wright State on top 8-7 after six.

In the seventh, Gray, who was 5-for-5 in the game with three runs batted in, hit a two-run home run and Wright State added its final run on a bases loaded walk to Hibberd, making it an 11-7 advantage for the home team heading into the eighth when Valpo rallied.

“They are a good hitting team,” Woodson said.  “With them the game is never over.  I hope that people feel that same way about us too.”

Every Crusader in the game had at least one hit as Valpo pounded out 16 on the evening.  Bain and Mahoney each had three hits while Hagel had three runs batted in.  Gray’s five hits led the Raiders’ 14-hit attack.

“A win like this makes it easier to come back for an afternoon game tomorrow after a late night tonight with the rain delay,” Woodson concluded.  “We just need to make sure we’re ready to go.”