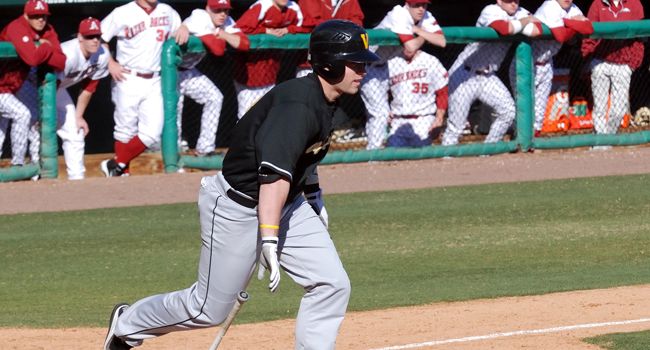 Valparaiso saw its nine-game winning streak, the fifth longest in the country, come to an end on Saturday afternoon, as Wright State scored the winning run in the bottom of the eighth inning for a 3-2 victory over the Crusaders at Nischwitz Stadium in Dayton, Ohio.

“We hung with them yet again,” head coach Tracy Woodson said.  “It was another pitcher’s duel, unlike last night.  It just comes down to executing.  We left too many on base and didn’t get the big hit.”

The Crusaders had their chances, with base runners in every inning after the fourth in a 2-2 game, but bounced into three double plays and were unable to score with the bases loaded and no one out in the eighth inning.  Valpo finished the game stranding nine runners.

The Crusaders scored first with a run in the opening inning.  Tanner Vavra (Menomonie, Wis./Menomonie H.S.) drew a one-out walk and moved to second on an error in which Chris Manning (Lake Forest, Calif./El Toro H.S.) reached base.  Will Hagel (Arlington Heights, Ill./Prospect H.S.) loaded the bases with a single to left, and John Loeffler (Burnsville, Minn./Burnsville H.S.) plated the game’s first run with a RBI ground out.

Wright State answered with two runs in the bottom of the first.  With two outs Tristan Moore drew a walk and Ryan Ashe lined a home run over the right field wall.

Kevin Wild (Brown Deer, Wis./Brown Deer H.S.) allowed just three hits over the next six innings, keeping the Crusaders in the game.  Valpo tied the contest in the fourth as Hagel led off with a double and moved to third on a Loeffler single.  Elliott Martin’s (Irivine, Calif./University H.S.) RBI ground out tied the game at two.

“I didn’t think Kevin had his best stuff today,” Woodson added.  He made some pitches when he had to and really battled out there.  This was as warm of a day as it has been in a while.”

Valpo had chances in the next several innings.  The Crusaders put runners on first and second with one out before a double play ball ended the sixth inning.  In the seventh, the Brown and Gold put runners on the corners with two outs but could not deliver the big hit.  Valpo loaded the bases in the eighth with none out, but a shallow fly out and a double play ended the threat.

“I was really disappointed in the eighth, having the bases loaded and none out and we didn’t score,” Woodson said.  “That was the ball game right there.”

The Raiders took advantage and plated the would-be winning run in the bottom of the eighth.  Zach Tanner led off with a single and moved to second on a bunt.  After Ryan Ashe’s single put runners on first and third, Garrett Gray delivered a sacrifice fly to plate Tanner.

The Crusaders had one last chance in the ninth as Billy Cribbs (Rochester, Mich./Rochester H.S.) led off with a single.  Pinch runner Mark Johnson (Evanston, Ill./Evanston Township H.S.) moved to second on a bunt and stole third with two outs, but a fly out ended the game.

Hagel finished 3-for-3 for the Crusaders while Loeffler and Steven Scoby (Delton, Mich./Delton H.S.) each had two hits as part of Valpo’s 10-hit attack on the day.

Jordan Marker earned the win (8-1), pitching two scoreless innings for the Raiders out of the bullpen.  Wild suffered the loss (5-2), giving up the three runs and six hits in 7.2 innings.

Valparaiso (24-21, 16-7 Horizon), which falls one game behind Wright State (32-15, 17-6) in the Horizon League standings, will look to pull back into a tie with the Raiders on Sunday afternoon in the conclusion of the three-game weekend series.  First pitch is slated for 12 p.m. CST at Nischwitz Stadium.