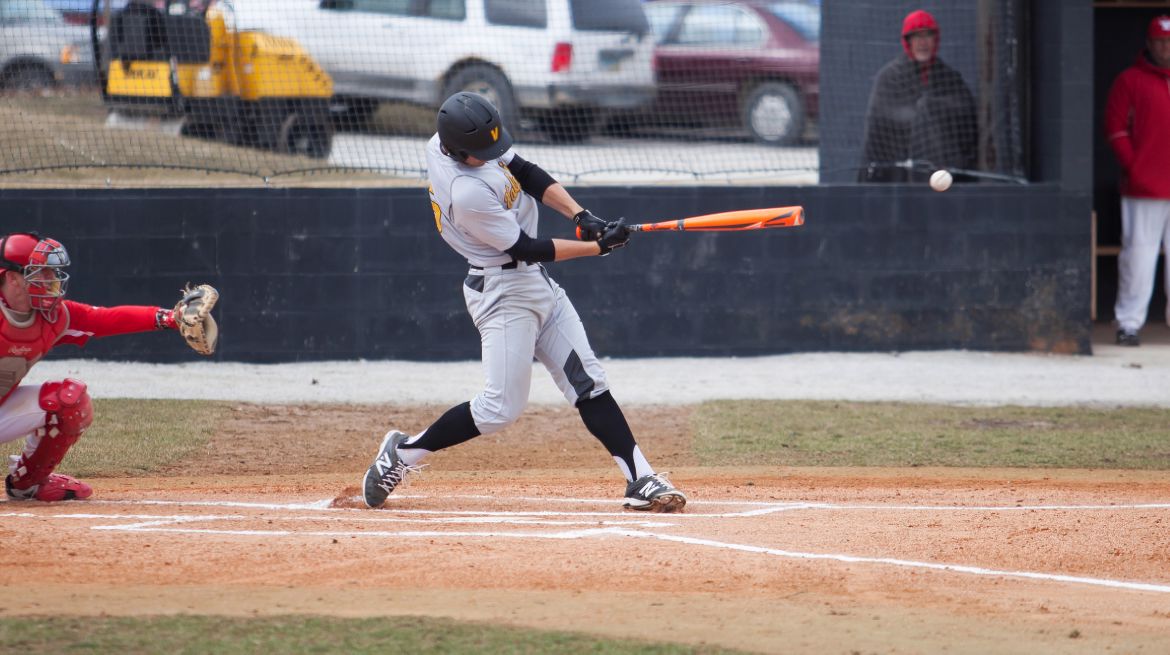 The Valpo baseball team hung a seven spot on the board in the top of the third inning at Rudy Abbott Field Saturday, but Jacksonville State manufactured nine runs thereafter to record an 11-10 walk-off win. Nate Palace (Westlake Village, Calif./Oaks Christian) launched his first home run of the season while leadoff man James Stea (Los Alamitos, Calif./Los Alamitos [Golden West]) went 3-for-5 with a double and a run scored.

Dan Delaney (Thousand Oaks, Calif./Thousand Oaks [Fresno State]) drove in the first run of the ballgame in the opening frame with an opposite-field shot that plated Nolan Lodden (West Des Moines, Iowa/West Des Moines Valley [Heartland CC]). Lodden boosted himself into scoring position with a stolen base after slapping a one-out single to right.

The Gamecocks temporarily took a one-run lead in the second after Elijah McCummings doubled home Paul Angel. For the second day in a row, Austin Green was a thorn in the side of the Crusaders after he drove home McCummings.

A one-run deficit quickly turned into a six-run surplus after a wild top of the third.

Stea started things off with a one-out single. After the Crusader center fielder stole second base, Lodden reached base after wearing a Jack Pierce offering. Palace made the lefty pay on the first pitch of the at-bat, sending Pierce's pitch deep over the left-field wall.

Delaney singled on a 2-0 pitch before advancing to second on a Josh Clark (Granada Hills, Calif./Hillcrest Christian [Riverside City]) bunt. Three batters later, Delaney came into score on a Scott Kapers (Schererville, Ind./Mt. Carmel) grounder to shortstop. Jeff Edwards (Massillon, Ohio/Jackson) made Jacksonville State pay with a two-run knock up the middle. Stea stacked on another run after sending a shot to right that allowed Kapers to touch home.

Valpo starter Ryan Fritze (Woodbury, Minn./Woodbury [Des Moines Area CC]) coughed up a leadoff double to McCummings in the fourth before surrendering an RBI single to Green that made it 7-3.

Angel slugged a double into the right-center gap to kick off the fifth. The left fielder appeared to be stranded after Green sent a grounder to shortstop with two outs. The throw, however, sailed wide and allowed Angel to score while Green advanced to second. Fritze got out of the mess after Taylor Hawthorne lined out to short to end the frame.

Reliever Colton Campbell held down the fort for the Gamecocks while the offense continued to chip away.

Gavon Golsan and Clayton Daniel both clobbered first-pitch deliveries from Fritze over the wall in left to make it a two-run tilt.

Five batters later, McCummings sent a 1-0 fastball up the middle, scoring Tyler Gamble who reached via walk. Green extended the inning when he reached on an infield error that allowed Angel to cross the plate.

Clark broke an 8-8 tie in the top of the seventh with a sac fly into foul territory. Palace tagged from third after a leadoff double off Joe McGuire. Valpo added an insurance run, causing damage with two outs. Shea Molitor (Plymouth, Minn./West Lutheran [Des Moines Area CC]) reached on a single, and then moved up 90 feet on a wild pitch. The third baseman raced home on a Sam Shaikin (West Hills, Calif./Chatsworth) RBI single the other way.

Righty Alex Dirienzo (Somerset, Pa./Somerset [Akron]) yielded a pair of hits after retiring the leadoff man in the 8th. As a result, skipper Brian Schmack called on sophomore Luke VanLanen (Pulaski, Wis./Pulaski) for the five-out save. VanLanen allowed an RBI single to the first batter he faced - McCummings - but the right-hander got back into the dugout after inducing a pair of infield groundouts.

Golsan set the table for the Gamecocks in a stomach-turning ninth inning. He sent a 1-0 delivery into left field for a hit before racing home on a Paschal Petrongolo one-out, game-tying RBI double to right-center. VanLanen issued a free pass to Gamble, but answered back with a strikeout of Angel for the second out of the ninth. The Crusader closer got ahead in the count 1-2 on Hayden White before the JSU catcher sent a grounder to second that was misplayed by the Valpo infielder. The gaffe allowed Peyton Williams, Petrongolo's pinch-runner, to score from second base for the game-winner.

Palace drove in three runs while Edwards plated two. Every Crusader who started either scored or knocked in a run. VanLanen (0-1) took the loss after Fritze surrendered five earned runs in five innings. Valpo again suffered from multiple errors. After committing five Friday, the Brown and Gold booted it around four times Saturday.

Valpo (0-2) will look to Mario Losi to salvage a game in the Sunday contest. First pitch is scheduled for 1:00 pm. Links to the broadcast and live stats are available at ValpoAthletics.com.