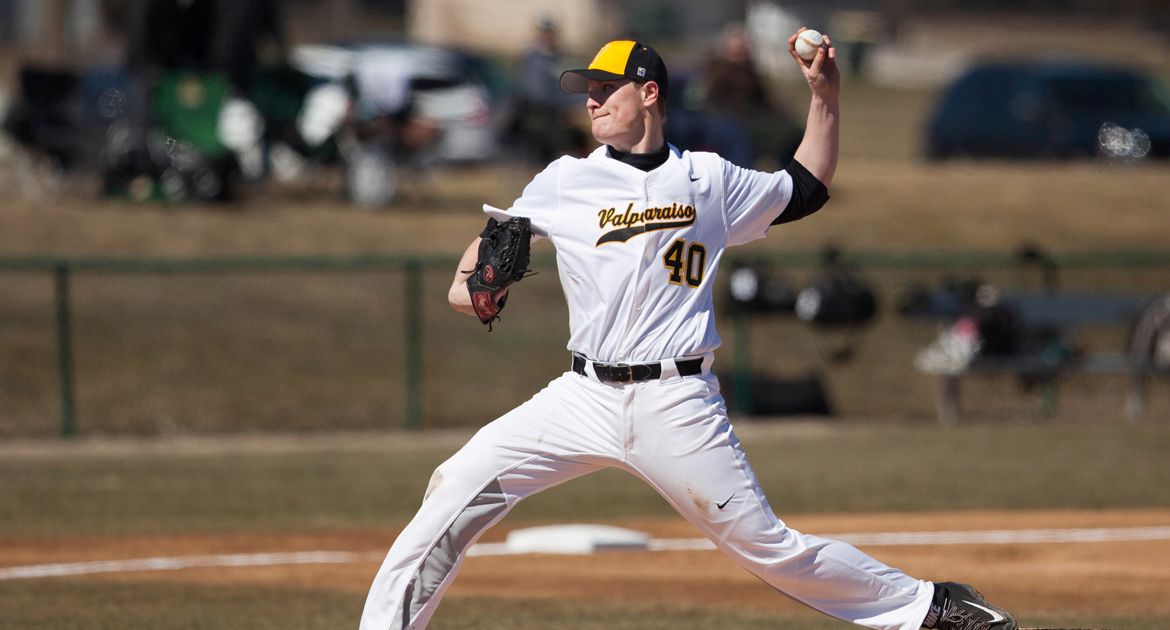 As they make their annual migration south for the launch of another college baseball season, the Crusaders are humming an unfamiliar tune.

"When you walk through our clubhouse you hear a lot more Metallica and much less country music," head coach Brian Schmack said.

The change in Pandora stations signals more than just background noise. It represents an attitude shift, a sense of now-or-never for a team with the majority of its core making its final tour.

The rotation carries over all its parts from 2015. The offense returns 94 of its 125 extra-base hits, including 18 of its 21 home runs. Three bats that left opposing pitchers broken, beat, and scarred are back for an encore in the form of Nate Palace (Westlake Village, Calif./Oaks Christian), Nolan Lodden (West Des Moines, Iowa/West Des Moines Valley [Heartland CC]), and Dan Delaney (Thousand Oaks, Calif./Thousand Oaks [Fresno State]). Furthermore, the third-year skipper views his club's bullpen as an enhanced asset entering the spring.

With the curtain ready to ascend on a new season, we take inventory of the 2016 Crusaders.

"We're deeper there than we've ever been. Top to bottom, there isn't one guy that I'm concerned with sending to the mound," Schmack said.

Bryce Yoder (Spencerville, Ind./Eastside), who saved six games a season ago, was the lone reliever appointed to the Preseason All-Horizon League Team unveiled Wednesday. Schmack is opting to use the sidewinder not for outs No. 25-27 this season, but, rather, as the bullpen's fireman. His change-of-look, change-of-pace style carries a stark contrast from a rotation that routinely sits in the upper 80's. Schmack cites Yoder's makeup - and experience - as conditions that will allow the senior to thrive in high-leverage spots.

Without hesitancy, Schmack anointed sophomore Luke VanLanen (Pulaski, Wis./Pulaski) as the team's closer. A raw talent as a freshman, VanLanen has bloomed after a full year-and-a-half of college coaching.

"He's our best arm out of the bullpen, and he's shed the freshman jitters. Luke is now pitching with the conviction that matches his stuff," Schmack trumpeted.

Sophomore lefty Chet Joslyn (Battle Creek, Mich./Lakeview) is another lefty who has seen his stock rise along with his radar gun readings.

"His velocity has spiked to where he's more of a power arm out of the pen. He hides the ball well and the changeup that made him so successful last season gives him another out pitch," Schmack remarked.

The skipper cited Haas as having assembled the best preseason of any arm on campus. Like a handful of others, Haas' velocity has seen an uptick thanks to the staff's weighted-ball regimen. His off-speed pitches possess sharper break as well.

"At first I was leery, but I did tons and tons of research on it and spoke with some people that have used it and have seen positive results. It's a still a work in progress, but so far our guys have bought into it," Schmack said of the new-school, velocity-enhancement plan.

Haas accompanies Foreman and Quigley as pitchers that either own starting experience or project into the role. Foreman has been the man on the bump for some of the most dominating pitching performances in the team's recent history (an 11-strikeout shutout at Wright State, eight innings of four-hit ball vs. UIC in the Horizon League Championship), but health has proved to be the righty's tallest obstacle.

The bullpen is routinely an afterthought whenever staff ace Dalton Lundeen (Streamwood, Ill./Streamwood) takes the ball. He treaded into the 7th inning in ten of his 14 starts in 2015 and delivered 100 or more pitches on twelve occasions. The senior will continue his ascent up the school's record books in Friday's season opener at Jacksonville State. Lundeen needs 78 1/3 innings pitched to become Valpo's all-time innings leader, and 90 strikeouts to move into second place in program history. Both appear well within reach for the hurler that punched out 94 batters in 93 2/3 IP last spring.

"Dalton's a great Friday guy because he preserves the bullpen. He gets the weekend off to a good start and he loves to compete," Schmack said.

Ryan Fritze (Woodbury, Minn./Woodbury [Des Moines Area CC]) is slated in the Saturday slot. The right-hander crafted a 3.82 earned-run average in the regular season before that figure spiked following a rough postseason start. Fritze owned the lowest opponents' batting average (.285) of any weekend starter last season, but elevated pitch counts often beckoned Schmack from the dugout in the middle innings. When aggressive later in the count as he is early on, opposing hitters can be overwhelmed by his fastball/slider combo.

With 23 career starts under his belt, junior Mario Losi (Anaheim, Calif./Canyon) will again be called upon on Sundays. His second and third starts of 2015 yielded 12 earned runs in eight innings, but his ERA experienced a correction after his next two resulted in a 16-inning scoreless streak. Losi will induce contact early in at-bats, and a changeup is his signature offering. He'll benefit from the middle infield's broad range.

After shuffling through a 2014 that generated a feeble .234 team BA coupled with a .301 slugging percentage, the offense returned to form with one of the better year-over-over improvements in program history. The 2015 edition raised its average to .275 and boosted its collective on-base percentage to .377, a 53-point increase. The offensive blitzkrieg resulted in 77 more runs scored in the same amount of games. To get there, the coaching staff again dipped its ladle in two, deep talent pools: junior college and Southern California. Palace, Lodden, and Delaney all mashed in their first full seasons with the Crusaders, and that muscle will again shape the lineup this spring.

"If he can stay healthy, Nate has a good chance to be an MVP-type player. He's a pure hitter. Nolan is in that conversation, too. He just goes with pitches and doesn't try to do too much. Dan is even stronger this year, and you can tell with the way the ball is jumping off his bat," Schmack said.

The Lodden/Palace/Delaney trio accrued 42 doubles, 12 home runs, and drove in 109 runs as part of a collective .326 batting average last season. Even more, the group exhibited patience to go with the power in the form of 81 combined walks.

While Valpo returns seven of its everyday starters from a year ago, the two graduates manned premium positions. Former shortstop Spencer Mahoney and center fielder Mark Johnson are now alums, but transfer James Stea (Los Alamitos, Calif./Los Alamitos [Golden West]) may serve as a blend between his two predecessors. Stea will be the team's center fielder and is penciled in at leadoff, a spot occupied by Mahoney since 2014. Speed and range are his bread-and-butter and he's been assigned the task of table setter for the aforementioned triumvirate.

Chad Jacob (Irvine, Calif./Woodbridge) was expected to inherit Mahoney's spot on the dirt from day 1, but the sophomore underwent minor surgery this past week and is on the shelf until March. Freshman Sam Shaikin (West Hills, Calif./Chatsworth) will experience a baptism by fire, but Schmack noted the rookie's poise, saying "he's not intimidated by anything."

The duo will have plenty of experience to its left in double-play partner Jeff Edwards (Massillon, Ohio/Jackson). The second baseman has developed into a defensive standout, and he can turn the twin-killing faster than anyone in the Horizon League. Edwards is instrumental on a team with a pitch-to-contact staff.

Josh Clark (Granada Hills, Calif./Hillcrest Christian [Riverside City]) will shift from left to right field. He batted .261 to go with a .353 on-base percentage in 2015, and, until Jacob returns, is one of just two left-handed bats in the lineup. Clark possesses all the tools one desires in a corner outfielder. He'll just search for more consistency in 2016.

Freshman Scott Kapers (Schererville, Ind./Mt. Carmel) will be the backstop in Friday's opener as depth at the catcher position exists as an enviable strength for this club. Perfect Game tagged Kapers as the Horizon League's Freshman of the Year in its prognostications earlier this week. Any offense he can provide will be an added bonus. Redshirt junior Jake Hanson (Yorkville, Ill./Aurora Christian) is in the fray as well. Hanson missed the entire 2015 campaign while recovering from Tommy John surgery.

Giovanni Garbella (San Diego, Calif./Cathedral Catholic) and Luke Syens (Burlington, Wis./Burlington [Madison]) will supplement the Crusader lineup with some thump in pinch-hit situations. Garbella is a solid fourth OF option while Syens has made a remarkable transition from the mound to the batter's box. Chase Dawson (Chesterton, Ind./Andrean) "has a chance to play every day" according to Schmack, due to the freshman's versatility and speed.

"He's a hard-nosed, aggressive, solid kid. He's done very well in the preseason and is a player who will get the job done," Schmack said of the local talent.

The head coach exuded an air of calm and confidence as the team concluded its final workout before departing for Alabama. Many of the parts are the same, but a newer, sharper edge exists within the whole. It's time to take the stage.