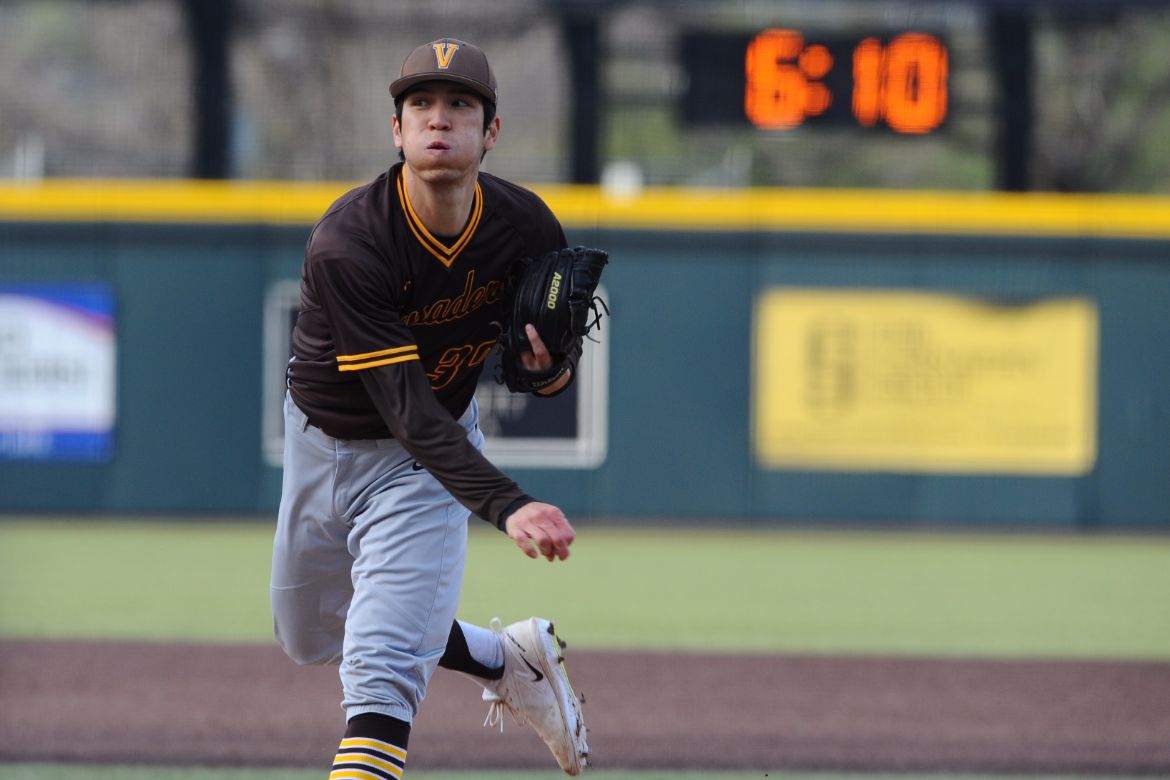 Next Up in Crusader Baseball: The Valparaiso University baseball team will finally begin its home slate after starting the season with 26 consecutive road games. The scheduled home opener against Western Michigan on Wednesday was canceled due to inclement weather, then the scheduled series opener on Friday was postponed due to unplayable field conditions. The Crusaders will finally lift the lid on their home season with Saturday's doubleheader.

Last Time Out: The Crusaders engaged in a marathon affair at Illinois State on Tuesday night and pulled out a 4-3, 12-inning victory over the Redbirds. Valpo turned in a strong team pitching performance as the staff racked up 10 strikeouts and issued just one walk. Illinois State did all of its damage in the fifth inning, then the game remained tied 3-3 until a bases-loaded walk by Chase Dawson in the top of the 12th plated Riley Dent, who had blooped a single earlier in the inning.

On the Air: All three games in the series will air on WVUR, 95.1 FM Valparaiso. Jordan Morandini and Jake Wulbert will have the call on Friday, while David Horak and Ethan Leach are slated to describe the action on Saturday and Sunday. Links to live audio and stats are available on ValpoAthletics.com.

Game 1 Starters: Mario Losi (0-3, 5.02 ERA) will look to build on a stellar outing that occurred on Friday night at Wichita State. Losi limited the Shockers to two runs, both coming on a home run, on five hits and one walk while striking out five in eight innings. He received no decision as Valpo eventually fell 4-3. For the season, Losi has struck out 19 and issued 16 bases on balls in 37 2/3 innings. He picked up a win at Northern Kentucky last year with six innings of one-run ball on March 20, a 16-1 Valpo victory. The Norse turned around and beat Losi at Emory G. Bauer Field on May 8, when the right-hander allowed six runs (two earned) on eight hits and one walk in 5 2/3 innings. The Crusaders will get their first look at redshirt senior Jean-Francois Dionne (2-1, 7.31 ERA). He will be making just his fourth start of the year. He came to Northern Kentucky from New Mexico Junior College.

Game 2 Starters: Wes Gordon (1-4, 4.98 ERA) will get the ball on Saturday for the Crusaders. He’s set to make his eighth start and has racked up a team-high 21 strikeouts against just six walks in 34 1/3 innings. Gordon, a junior college transfer, will face Northern Kentucky for the first time. The Crusaders will oppose southpaw Trey Ganns (2-4, 8.37 ERA), who was a member of the Horizon League second-team a year ago after earning Atlantic Sun all-freshman team honors in 2015. He is a two-way player who also plays first base and designated hitter. The only time the Crusaders faced Ganns a year ago, they roughed him up to the tune of six earned runs on eight hits in three innings in a 16-1 victory.

Sunday Starters: Grant Inman (3-2, 4.55) will slide back into the weekend rotation after a two-week hiatus. He was sharp in a tune up on Tuesday at Illinois State, facing the minimum over three scoreless frames. That came after he became the first Valpo pitcher to win a game at Purdue since 1977 on March 29 by hurling 5 2/3 strong innings (one run on six hits) against the Boilermakers. Inman will oppose Canadian-born righty Pat Kelley (2-1, 4.63), who will make his eighth start. He’s issued eight walks and fanned 23 in 35 innings. He transferred to Northern Kentucky from the University of Lethbridge before the 2016 season. Kelley faced Valpo twice last season, receiving no decision (3 IP, 4 H, 2 R) on March 18 before picking up his first victory in a Norse uniform on May 8 (5 IP, 5 H, 3 R, 3 ER).

Series Notes: The Crusaders own a 5-4 edge in the all-time series against Northern Kentucky. They won four of the six meetings a year ago, including a 10-7 win in the first round of the Horizon League tournament on May 25. Northern Kentucky did win both games at Emory G. Bauer, sweeping a doubleheader on May 8. Before last season, the two teams hadn’t met since 1985.

Inside the Crusaders: The Crusaders have cracked the Top 100 in RPI, as they sit at No. 98. They’ve played a difficult schedule with a slew of games against strong competition on the road to begin the season. The Crusaders have been hurt by illnesses over the last four games, as starting second baseman Chase Dawson missed all three games against Wichita State, then starting shortstop Chad Jacob sat out Tuesday’s game at Illinois State. In addition, shortstop Jayden Eggimann is on the shelf with an injury. Scott Kapers, normally a catcher, has played infield in each of the last four games. The Crusaders rank fourth in the league in batting average (.253) and third in ERA at 3.79. Nate Palace leads Valpo in hitting and ranks eighth in the league at .318 and sits third in the league in slugging percentage at .598. Palace is the league leader in total bases with 64. James Stea is tied with Wright State’s Zach Weatherford for the league lead in stolen bases with 15 and leads the Crusaders (sixth in the league) in OBP at .429. Stea has been hit by a pitch a league-leading 11 times. He’s one of 16 players in the nation with 15 or more stolen bases. He’s also one of 18 players in the nation who have been hit by a pitch 11 times or more.

In the Other Dugout: Northern Kentucky’s strength is its offense, as the Norse enter this weekend leading the league in runs scored (158), hits (258), doubles (57), slugging percentage (.416), total bases (391) and walks (106). However, they’ve struggled on the mound as they hold a 6.70 ERA that ranks fifth in the league. Dominic Mercurio leads the team in hitting at .318, ninth in the league. Trey Ganns owns a .444 on-base percentage, second in the Horizon. Jake Richmond is the league leader in runs scored with 23, while TJ Alas leads the way in doubles with nine. The Norse are already over half way to matching their league win total from last year, when they went 9-21. They were picked to finish fifth in the Horizon League preseason poll. Northern Kentucky’s most recent game was a 6-5 loss to Eastern Kentucky on Tuesday. They won two of three against Youngstown State and swept all three form Milwaukee. The Norse, in their second season in the Horizon League, are coached by veteran skipper Todd Asalon.

Driftless Drivel: All five players in the Horizon League who have seven doubles or more will be participating in this game – TJ Alas, Jake Richmond, Nate Palace, Chad Roberts and Jake Hanson… Valpo achieved its first one-run win of the season on Tuesday at Illinois State after dropping its first eight one-run affairs… Nate Palace owns a 13-game hitting streak entering this weekend’s series. He has 105 career RBIs and enters the weekend needing eight more to crack Valpo’s career Top 10.