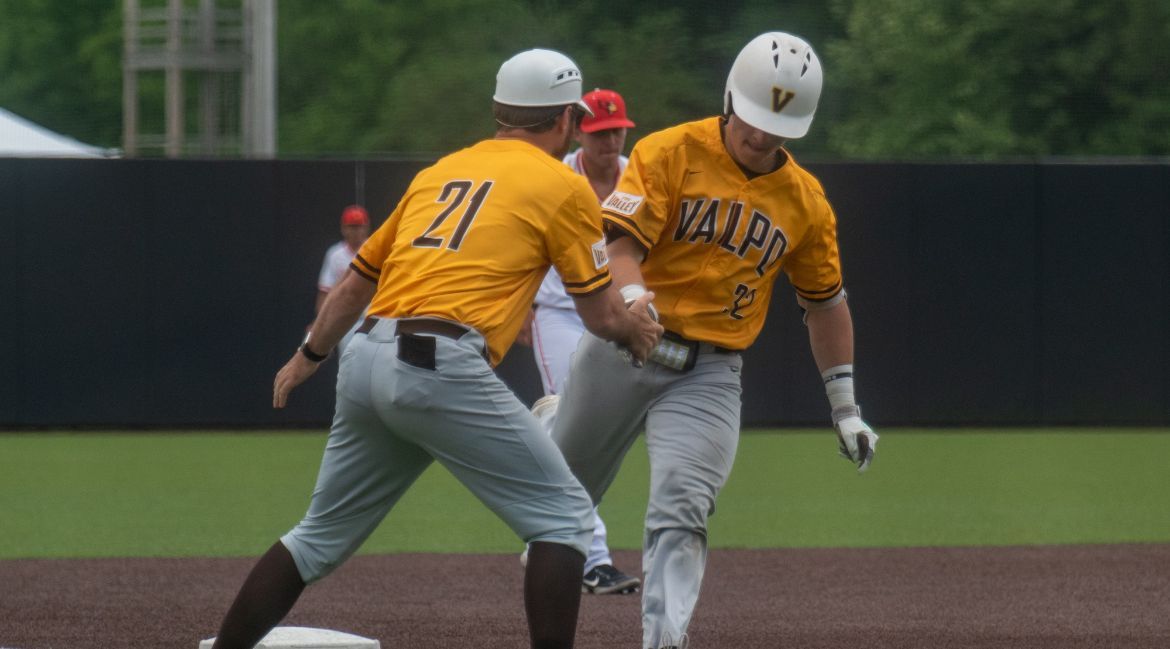 Matt Olive lifted a go-ahead home run in the top of the ninth on Thursday.
Valparaiso at Illinois State | May 27, 2021

When it was Matt Olive’s turn to pick up his teammates, the Valparaiso University baseball freshman came through in the most significant moment possible.

With two outs and two strikes in the top of the ninth inning of a 5-5 tie on Thursday in a Missouri Valley Conference Tournament elimination game, Olive (Minneapolis, Minn. / Blake School) delivered a go-ahead solo homer to left, lifting Valpo to a come-from-behind, 6-5 victory over Illinois State. The Brown & Gold advance to Friday after the team’s second victory in the event, which is being hosted at Itchy Jones Stadium in Carbondale, Ill.

Two days earlier, Olive’s teammates picked him up to render a late error insignificant by beating Missouri State 6-4 in extra innings. With a touch of poetry that only the sport of baseball could provide, it was the other way around on Thursday, as Olive’s late blast carried his team past the Redbirds.

The bottom of the ninth provided another heart-pounding moment as a wild throw to first with two outs pulled first baseman Kyle Schmack (Wanatah, Ind. / South Central) off the bag, and the runner was initially ruled safe as the tying run scored. However, the call was overturned on replay review, sending the Valpo dugout into a state of celebration.

Valpo (16-34) will play at either 10 a.m. or 2:30 p.m. on Friday. If DBU beats Bradley on Friday afternoon, Valpo will play at 10 a.m. against the loser of Southern Illinois vs. Indiana State. If Bradley beats DBU, Valpo will play Bradley at 2:30 p.m. The game will air on ESPN+ with links to live video and stats available on ValpoAthletics.com.