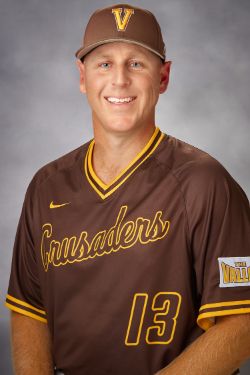 Brian Schmack finished his seventh season at the helm of the Valpo baseball program in 2020.

In July 2013, Valparaiso University Director of Athletics Mark LaBarbera announced that Schmack had been named the 17th head coach in Valpo baseball history and just the sixth since 1946.

In 2017, Schmack had success despite guiding a youthful roster that featured 11 freshmen and 15 total newcomers after graduating 12 seniors in 2016. He led the team to 24 wins, including a strong finish to the regular season that saw the squad win eight of its last 11. Under Schmack's direction, three players earned Horizon League all-freshman team honors, two of whom were pitchers. That marked the first time Valpo had three players on the all-freshman team since 2013 and the seventh straight year the Crusaders had multiple players on the all-freshman squad. After posting a 4-1 record, 2.93 ERA and seven saves, right-handed pitcher Jon Tieman was named a Freshman All-American, becoming the first Valpo player to earn that high honor since shortstop Spencer Mahoney in 2012.

The 2017 season also saw the Crusaders set the program record for team fielding percentage, as they put together a .971 fielding percentage that bested the previous mark of .968, which had stood since 1998. Schmack picked up his 100th career victory on May 14, 2017, a 7-6 triumph over eventual Horizon League champion UIC, becoming the fifth head coach in Valpo history to reach the century mark.

Schmack pitched in professional baseball from 1995-2004 in the Chicago White Sox, Texas Rangers and Detroit Tigers organizations after breaking in with the Newark Bison of the Frontier League. In 2003, Schmack earned a promotion to the major leagues with the Tigers, appearing in 11 games and posting a 1-0 record with a 3.46 ERA.  He earned his first major league victory against Cleveland on Sept. 2, 2003.