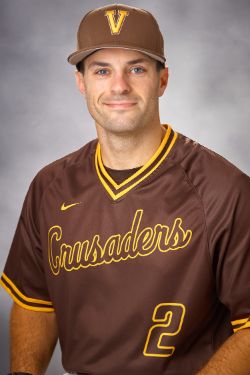 After thriving in his duties as a volunteer assistant coach for three seasons, Kory Winter took over hitting and recruiting as a full-time assistant coach beginning with the 2019 campaign.

During Winter’s fourth season as Valpo hitting coach in 2022, the offense was led by Nolan Tucker, who earned Freshman All-American honors and First Team All-MVC recognition after posting a team-high .365 batting average and a .431 on-base percentage, also a team best. The team owned its best record through 22 games since 1998 and the season included road series victories at UIC and Illinois State.

Winter was in his third season as hitting coach as Valpo enjoyed its best league-only winning percentage since joining the prestigious Missouri Valley Conference in 2021. A young team that received 57.8 percent of its at-bats from freshmen and 68.1 percent of its at-bats from freshmen or sophomores won two games in the MVC Tournament for the first time since joining the league. Winter’s offense featured MVC Freshman of the Year Kaleb Hannahs, who also garnered All-MVC Second Team and Freshman All-American honors. Compared to the most recently completed season of 2019, the team improved its batting average, slugging percentage, on-base percentage and fielding percentage in addition to increasing its number of home runs, doubles, hits and runs scored in 2021. The squad stole 33 bases, its highest total since 2017.

Winter, who also serves as Valpo’s outfield instructor, helped the team finish with a .969 fielding percentage in 2021, the third-best in program history. The team’s top three fielding percentages of all-time have all come since his arrival on staff in 2016.

Winter’s offense had a banner day on May 1, 2021, when Valpo had seven doubles and 42 total bases in a single game vs. Illinois State, the most by any MVC team all season in both categories. That game saw the two teams combine for the most runs scored (30), hits (35), doubles (9) and home runs (9) in any MVC game all season. The 17 runs marked the program’s highest total since 2018, 18 hits represented its highest total since 2018 and 42 total bases was the team’s top output since April 4, 2006. Valpo drilled five home runs in a game for the first time since 2006.

Winter aided the development of several offensive standouts over the course of their careers, including outfielder Riley Dent, who wrapped up his five-year tenure with 83 career bases on balls, tied for 10th in program history. Valpo had three sets of back-to-back jacks during the 2021 season and had two walk-off wins in the same day in a doubleheader sweep of SIU on April 23, including a walk-off home run by Jonathan Temple. In addition to Hannah’s aforementioned honors, several other Valpo position players received recognition in 2021, including All-MVC Honorable Mention choice Brady Renfro and MVC Scholar-Athlete First Team selection Steven Fitzsimmons.