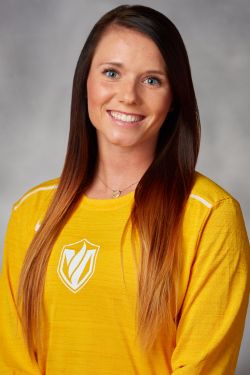 2017: Started first nine games of season in center field before suffering season-ending injury at Alabama Mar. 8 ... received hardship waiver and will return in 2018 for final season of eligiblity ... hit .265 (9-for-34) with four runs scored and four stolen bases ... enters final year with 45 career stolen bases, third-most in program history ... opened season with a base hit and a stolen base Feb. 17 at North Carolina A&T ... recorded career-high four hits, going 4-for-5 with a run scored, an RBI and a stolen base, Feb. 19 in win over Howard ... went 3-for-4 with two runs scored and a stolen base Mar. 5 in victory against Stony Brook ... picked up a base hit in Tuscaloosa against a top-10 Alabama squad.

2016: Started every game in center field for the second straight season, making 52 appearances ... hit .278 with 23 runs scored on the year ... also drew 24 walks, posting a .368 on-base percentage ... increased batting average to .320 within Horizon League play ... ranked fifth in the Horizon League and fifth in a single season in program history with 23 stolen bases ... thrown out just once attempting to steal on the year ... enters senior year third in program history with 41 career steals ... led the Crusaders in stolen bases and ranked second in runs scored ... recorded 12 multi-hit games on the season ... tallied six outfield assists on the year ... stole pair of bases Feb. 27 versus Southeast Missouri ... drew two walks, stole two bases and scored twice Mar. 4 at USC Upstate ... stole career-high three bases Mar. 5 versus Presbyterian ... picked up two hits in back-to-back games versus Utah State (Mar. 11) and Wisconsin (Mar. 12), as well as a two-hit effort to close out the weekend Mar. 13 at UNLV ... stole two bases in Mar. 29 nightcap win over Bowling Green ... went 4-for-6 with two runs scored in doubleheader sweep of Northern Kentucky Apr. 3 ... went 3-for-4 with a double in nightcap versus Green Bay Apr. 5 ... finished series versus Detroit Apr. 22-23 4-for-10 with two walks ... stole a base in four straight games Apr. 23-29 ... scored two runs and went 2-for-3 at the plate in May 1 win over Oakland ... tallied two hits apiece in both ends of doubleheader at Wright State May 7 ... drove in a pair of runs in tournament-opening win over Youngstown State at Horizon League Championship May 11 ... tallied two hits in tournament-clinching victory over Wright State May 14 ... recorded a hit in each of the Crusaders' two NCAA Tournament Games against #2 Michigan and #23 Notre Dame, stealing a base in the latter game as well.

2015: Started all 51 games in her sophomore season for Valpo in center field ... hit .269 with 30 runs scored and 11 RBIs ... stole 11 bases while being caught just once on the basepaths ... one of the league's top outfield defenders, registered nine outfield assists on the season - including six times she threw out a runner at home plate 8-2 ... tallied 14 multi-hit games on the season and scored multiple runs on seven occasions ... started season strong at the Mercer Invitational, going 10-for-20 with five runs scored over five games en route to earning All-Tournament Team accolades ... registered back-to-back three-hit games against IPFW and Mercer on Feb. 7, scoring two runs and tallying two RBIs against the Mastodons ... in rematch with IPFW Feb. 8, scored two runs and stole a pair of bases ... kicked off Horizon League play Mar. 20 by going 2-for-2 with two stolen bases against Green Bay ... picked up a three-run triple in victory over the Phoenix the next day ... went 2-for-4 with two runs scored in Horizon League games Mar. 28 versus Wright State and Apr. 4 against Oakland ... scored three runs in opener of twinbill at Cleveland State Apr. 18 ... went 3-for-4 in nightcap at Detroit Apr. 25 ... closed out regular season with 2-for-4, two-run effort in victory over Youngstown State May 2.

2014: Appeared in all 58 games for the Crusaders as a rookie, starting 55 times in the outfield - 46 times in center field and nine times in left field ... a Second Team All-Horizon League honoree and member of the league's All-Freshman Team ... hit .263 on the season with 30 runs scored and nine RBIs ... ranked second on the team and tied for fifth in the league in runs scored ... served as the catalyst at the bottom of the Valpo order during Horizon League play, hitting .364 with 16 runs scored against league foes ... tied for second in the league in league-only contests in runs scored ... recorded 13 multi-hit games on the year and scored multiple runs seven times ... went 3-for-6 with three runs scored and two RBIs in her third career game, Feb. 8 against Seton Hall ... recorded multi-hit games Feb. 14 against Central Arkansas and Feb. 15 versus Boston College at the Ragin' Cajun Invitational ... went 4-for-8 with five runs scored and two RBIs in Horizon League opening doubleheader Mar. 22 at Youngstown State ... hit safely in seven straight games Apr. 2-8 ... posted three hits, three runs scored and two stolen bases in a doubleheader against Eastern Michigan Apr. 2 ... went 5-for-6 with five runs scored in Valpo's three-game sweep of Detroit Apr. 5-6 ... registered two hits in back-to-back league games Apr. 13 against Cleveland State and April 18 versus Oakland ... had 3-for-4 day at the play May 9 against UIC and scored game-winning run in extra innings to advance Crusaders to the Horizon League Championship title game.

Prep: A four-year letterwinner for the Cougars ... earned First Team All-State honors as a senior after receiving Second Team honors as a junior ... named to state All-Star team as a senior ... earned MVP honors as a senior ... a First Team Tucson coaches selection her junior year ... ranked among top five in the state in steals her junior year ... named a Second Team All-City honoree as a sophomore ... started career by earning Honorable Mention All-Conference accolades as a freshman ... played ASA most recently for Arizona Hotshots 18U Gold (fall 2012-summer 2013) ... previously played for the Arizona Desert Thunder 18U Gold, helping the team capture the ASA 18U Gold national title in 2012 ... hit .364 over eight games to help lead her squad to the championship ... also earned one letter in soccer.

Personal: Taylor is the daughter of Brad and Connie Lawson ... major is exercise science.