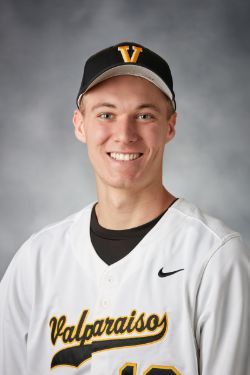 2017: Made 12 starts and one relief appearance during his sophomore season... Shared the team lead in wins with four, the most of any Valpo starting pitcher... Threw 53 innings and struck out 37 against 26 walks... Threw 5 2/3 innings of one-run ball on March 29 at Purdue, picking up the victory to help Valpo to its first win at Purdue since 1977, snapping a 27-game losing streak in games at Purdue... Established a new career high with seven strikeouts in seven innings of work - the longest start of his career - on April 23 vs. Wright State. Took a tough-luck loss in a 3-1 Valpo defeat.

2016: Made eight appearances, including five starts during a rookie season that began on April 5 as he wrapped up recovery from Tommy John surgery...struck out four Redbirds over 1.2 innings in his collegiate debut versus Illinois State...blanked Notre Dame (April 13) over three innings, a stint that included four strikeouts and just one hit allowed...yielded four earned runs in five innings in his first start of the season at Chicago State (April 20)...earned the win over the Cougars (April 26) in a rematch the following week, where he punched out four batters while yielding a lone earned run in five innings of work....crafted a 3.86 regular-season ERA and amassed 21 strikeouts on the season over 29 innings.

Prep: A four-year letter winner for coach Dave Ginder's Chargers...led team to a sectional title in 2012, 2013 and 2014 while earning First Team All-Conference accolades.