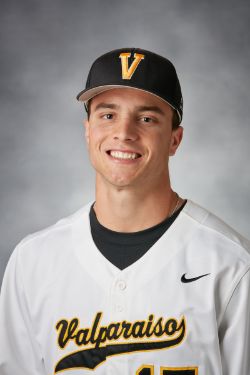 2016: Burst onto the scene to patrol center field in 56 games (55 starts) during his first season with the Crusaders...batted .318 with a .398 on-base percentage...scored 54 runs, the second-most on the team...tied for the club lead in stolen bases (18), triples (3) and hit-by-pitches (11), while corking one home run and driving in 20...opened the 2016 campaign with a 7-for-15 weekend at Jacksonville State (Feb. 19-21), including three runs, a double, a round-tripper, three RBIs and a stolen base...doubled and drove in a run as part of a 2-for-5 series finale at Louisiana Tech (March 6)...enjoyed a 6-for-13 series at Northern Kentucky (March 18-20) with five runs scored and two driven in during a three-game sweep of the Norse in Highland Heights...crossed the plate three times and stole a base en route to a 4-for-10 three-game set against Wright State (March 25-26)...boosted his average from .267 to .296 after he collected two hits in both contests of a doubleheader versus Milwaukee (April 3) at Kapco Park in Mequon...registered two hits, touched the plate and drove one in at Western Michigan on April 12...cracked a double, walked, scored and laid down two sacrifices in Valpo's series-opening triumph over Oakland (April 15)...amassed three runs as part of a 2-for-3 afternoon at Chicago State on April 20...doubled and scored at UIC (Apr. 22)...recorded a hit and a run scored in four straight tilts from April 25 to May 1...crossed the plate twice and smacked two hits at Northern Illinois on May 3...ripped a double and added two runs scored to his stat sheet on May 6 at Wright State...tallied three runs, an RBI and two knocks in a 13-10 win over Purdue (May 11)...torched Youngstown State with a 7-for-11 twinbill with three runs, two doubles, a triple and an RBI on May 13...touched the plate in each contest of a doubleheader versus Oakland on May 15...swatted two hits in all three tilts of a three-game set versus Youngstown State (May 19-21) to close out the regular season...was named to the Horizon League All-Tournament Team following his 9-for-20 (.450) week highlighted by five runs, three doubles, five runs batted in and two stolen bases.

2014-15 (Golden West College): Led the league in stolen bases and was named All-Conference as a center fielder...made academic Honor Roll.