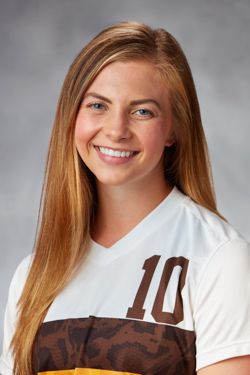 2019: Appeared in 17 matches during junior season, starting 12 times ... played a total of 858 minutes ... an Honorable Mention All-MVC honoree ... finished season with a team-high five goals and 10 points ... scored all five goals within MVC play ... ranked second in the conference in goals and points in MVC-only play, as well as second in game-winning goals (2) ... netted a pair of goals for first career brace in 3-2 defeat at Indiana State Oct. 5, twice tying the match ... scored lone goal of match in the 25th minute of 1-0 win over Evansville Oct. 20, her first career match-winning goal ... led way as Valpo secured MVC Tournament berth in regular season finale against UNI Nov. 1 by scoring a pair of goals, including the match-winning goal, in Valpo's 3-0 win ... became just the second player in program history to record a pair of multi-goal matches in regular season play against conference opponents, joining all-time leading scorer Lori Moore ... named MVC Offensive Player of the Week Nov. 4 for her output against the Panthers ... tallied just 12 shot attempts, including only seven on goal, to score her five goals.

2018: Appeared in 14 matches as a sophomore, starting 12 times ... started each of the season's final 11 matches ... played a total of 1,179 minutes, including playing the entire match seven times ... finished the season with five shot attempts, three of which came in the season finale against Indiana State Oct. 25.

2017: Made 15 appearances as a freshman for the Crusaders ... earned starts Sept. 10 at Fort Wayne and Oct. 29 in the MVC Tournament at Loyola ... enjoyed a dream debut in season opener Aug. 18 against Grace, coming off the bench in the second half and scoring her first career goal just 64 seconds later ... scored a goal as well in MVC play at Drake on Sept. 30 ... played a total of 447 minutes on the season, including a season-high 64 minutes of action in MVC Tournament at Loyola.

Personal: Daughter of Chris and Suzanne Torhorst ... enrolled in the physician's assistant program.