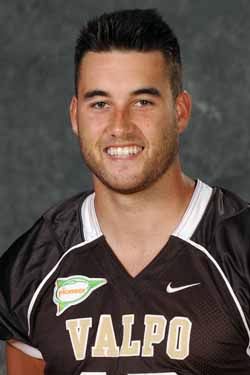 2012: Appeared in nine games for Valpo including four starts...led the team in touchdown receptions with three...recorded 27 receptions for 218 yards overall...caught four passes for 16 yards in the season opener versus St. Joseph's (Aug. 30)...caught five passes for 32 yards against Butler (Oct. 6) in addition to registering a 10-yard rush...collected a season-high 61 receiving yards on three catches to go with a touchdown against Marist (Oct. 27)...hauled in a touchdown pass in Valpo's 41-21 win over Campbell on Nov. 3rd...made it three consecutive weeks with a TD reception when he took it the house against Davidson (Nov. 10)...closed out the season with three catches for 29 yards at Morehead State on Nov. 17th.

2011: Saw action in nine games as a rookie for the Crusaders, making four starts ... first collegiate start came at Youngstown State (Sept. 10) ... finished second on the team with 30 receptions for 354 yards ... hauled in a three-yard touchdown pass in the win over Campbell (Nov. 12) ... caught a season-high six passes for 107 yards at Davidson (Nov. 19) in the season finale ... caught a two-point conversion against Davidson ... returned a pair of kickoffs at Youngstown State ... season-long reception of 41 yards came at Davidson ... named team’s Offensive Rookie of the Year ... named team’s Offensive Player of the Week for the Davidson contest.