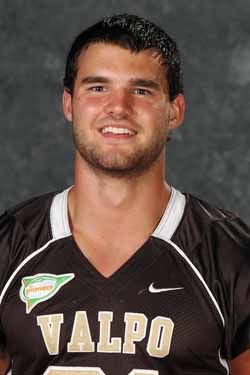 2016: Appeared in 11 games and had 84 tackles (41 solos) for the Crusaders... Made two interceptions and broke up six passes... Had a 30-yard interception return for a TD on Sept. 3 at Illinois State, then followed with an interception and an 18-yard return in Week 2 of the season at Sacred Heart on Sept. 10... Has six career interceptions... Won the PFL Defensive Player of the Week Award after making  the pick six on Sept. 3... Reached double-figure tackles on three occasions, culminating with a career-high 14 on Oct. 29 against Butler... Finished second on the team in tackles and second in the PFL among defensive backs... His 7.6 tackles per game placed him in a tie for eighth in the PFL.

2015: Played in nine games as a sophomore ... ranked fifth on the team with 50 tackles ... 34 of his stops were of the solo variety, third-most on the team ... led Crusaders with four interceptions ... opened season with four tackles at Eastern Kentucky Sept. 3 ... recorded six or more tackles on five occasions, starting with a six-tackle effort versus San Diego Sept. 26 ... also picked off a pair of passes against the Toreros ... recorded another interception the next week (Oct. 3) in win at Davidson ... tallied six tackles Oct. 10 at Drake, starting stretch of four straight games with at least six stops ... finished with eight tackles - six solo - an interception and a pass breakup Oct. 17 against Dayton ... set new career high with 10 tackles Oct. 24 versus Stetson ... posted eight tackles - seven solo - Nov. 7 at Butler.

2014: Appeared in eight contests for the Crusaders...collected 15 tackles - five solo - in his rookie campaign...made his collegiate debut at Western Illinois on Aug. 28 and recorded two tackles...made a stop versus St. Joseph's (Sept. 6)...registered a pair of tackles in back-to-back games at William Jewell (Sept. 20) and Campbell (Sept. 27)...amassed a season-high six tackles while breaking up a pass attempt versus Marist (Oct. 4)...logged a stop versus Missouri Baptist (Oct. 11) in the Crusaders' 55-7 win over the Spartans on Homecoming...tallied a tackle versus Drake (Oct. 18).

Prep: A three-year letter winner for Mitch Street and the Huskies...team went 43-8 in his time at Hamilton Heights...named the Hamilton Heights Defensive Player of the Year, a First Team All-MIC (Mid-Indiana Conference) defensive back and First Team All-Hamilton County Defensive Back his senior season...was a part of the 2012 state finals runner-up team...also lettered twice in basketball and was voted team Defensive Player of the Year in 2011-2012 and was the Mr. Hustle Award recipient.

Personal: Kellan is the son of Marty and Marissa Hughes ... major is kinesiology and exercise science.