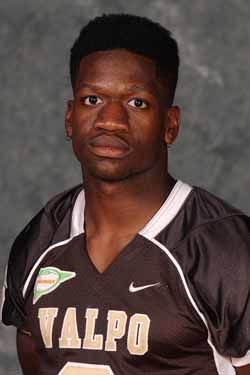 2015: Appeared in all 10 games during his junior campaign ... totaled 26 tackles - 14 solo - on the season and also recorded a pair of pass breakups ... opened season Sept. 3 at Eastern Kentucky with three tackles ... set new career best with five tackles Sept. 26 at San Diego and matched that mark later in the year Nov. 21 at Jacksonville ... posted four tackles, including one for a loss, Oct. 24 versus Stetson ... member of PFL Academic Honor Roll.

2014: Played in ten games at defensive back for Valpo...recorded two solo stops in the season opener at Western Illinois on August 28th...added three tackles to his stat sheet - two solo - at William Jewell (Sept. 20) in the Crusaders' 39-30 come-from-behind win...was responsible for a pair of tackles versus Drake (Oct. 18)...tallied a season-high four stops at San Diego (Nov. 15) in addition to breaking up a pass...rounded out the season with two tackles versus Davidson (Nov. 22) in Valpo's 27-13 victory in the season finale.

2013: Appeared in eight games in his first season with the Brown and Gold...named team's Defensive Prep Player of the Week in Week 1...made his first collegiate tackle versus William Jewell (Sept. 14)...recorded a stop in Valpo's 49-42 overtime win over Campbell (Sept. 28) on homecoming...assisted on a tackle for a loss and registered two stops at Marist (Oct. 5)...notched two solo tackles at Mercer (Oct. 12)...logged two tackles versus Morehead State (Oct. 19)...added a solo tackle to his stat sheet versus San Diego (Nov. 2)...wrapped up his rookie campaign with a tackle at Butler (Nov. 9).

Prep: A two-year letterwinner for the Eagles who were a State Semifinalist in 2011...voted team captain and team defensive back MVP his senior year...First Team Tier 1 All-County, First Team All-Macomb Area Conference-Red, Second Team All-Eastside in 2012...also was a three-year letterwinner in track & field.

Personal: Idode is the son of Philomena Kerobo ... major is finance.