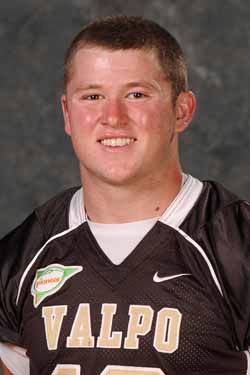 2016: Played in 10 games and led Valpo in rushing with 576 net yards as a junior while serving as Valpo's primary starting running back... Averaged 3.7 yards per carry and 57.6 yards per game on the ground while running for two touchdowns... Also played a role in the passing game, making 30 catches for 285 yards and three scores, averaging 9.5 yards per catch and 28.5 yards per game... Ranked 10th in the PFL in rushing at 57.6 yards per game... Ranked seventh in the PFL in all-purpose yards with 94.0 per game... Also had five kick returns for an average of 15.8 yards per return... Led the Crusaders with 940 all-purpose yards... Had three straight games with 100 or more yards on the ground - Sept. 17 vs. Trinity International, Sept. 24 vs. Davidson and Oct. 1 at Morehead State. Set a new career high in each of those games, culminating with 110 against the Eagles... Became the first Crusader with three straight 100-yard rushing performances since Jeff Horton in the final three games of the 2005 season... Had a career-high 189 all-purpose yards on Sept. 17 at Trinity International, notching TDs both on the ground and through the air... Turned in a career-high 99 receiving yards in the season finale on Nov. 12 against Jacksonville, catching two TD passes including a career-long reception of 55 yards... Member of the 2017 PFL Honor Roll.

2015: Saw action in all 10 games for the Crusaders during his sophomore season ... served as Valpo's primary kick returner, bringing back 35 kickoffs for 790 yards (22.6/return) ... recorded a kick return for a touchdown as well ... versatile offensive threat carried the ball 27 times for 112 yards and a pair of touchdowns ... caught four passes for nine yards as well ... tallied 919 total all-purpose yards on the year ... recorded a 56-yard kickoff return Sept. 12 against Sacred Heart ... returned three kickoffs for a season-best 122 yards, including an 89-yard touchdown return in win at Davidson Oct. 3 ... named the team's Special Teams Player of the Week following the win over Davidson ... ran the ball twice for 21 yards Oct. 10 at Drake ... returned five kickoffs for 118 yards Oct. 17 against Dayton ... totaled a season-high eight carries for 40 yards Oct. 24 against Stetson, including a one-yard touchdown run ... scored in two ways Nov. 14 against Morehead State, throwing his first career pass for a four-yard touchdown and running in from one yard out later in the game ... finished with four carries for 35 yards against the Eagles ... member of the PFL Academic Honor Roll.

2014: Appeared in 10 games for the Crusaders as a true freshman...emerged as one of the most dynamic and electric players in the PFL...led the nation in average kickoff return yards with 34.9...was one of only three players in the PFL to run a kickoff back for a touchdown...was one of only seven players in the PFL to return a punt for a touchdown...finished fourth in the nation in blocked kicks (4)...compiled 608 all-purpose yards...returned a kickoff 27 yards in his collegiate debut versus St. Joseph's on Sept. 6...fielded two punts for 51 yards including a touchdown versus Missouri Baptist (Oct. 11)...recorded a season-high 175 all-purpose yards at Morehead State (Oct. 25), where he turned one rush into 16 yards, caught two passes for 14 yards and returned four kickoffs for a combined 145 yards - one of which was a 91-yard TD sprint...tallied 33 rushing yards on five touches including a score at Dayton (Nov. 1) while racking up 42 return yards on two kickoffs...ran a kickoff back 56 yards, corralled an eight-yard reception and broke loose for 39 yards on four carries at San Diego (Nov. 15)...put the finishing touches on a monster season with a 74-yard kickoff return and 25 rushing yards versus Davidson (Nov. 22) in the Brown and Gold's 27-13 victory in the season finale...received All-PFL Honorable Mention accolades.

Prep: A four-year letter winner for Brandon Walker and the Cowboys...named All-County Honorable Mention his junior and senior seasons...also lettered in lacrosse three times and track & field once...owns the school record for the 400-yard dash.

Personal: Jarrett is the son of Henry and Lisa Morgan ... major is sports management.