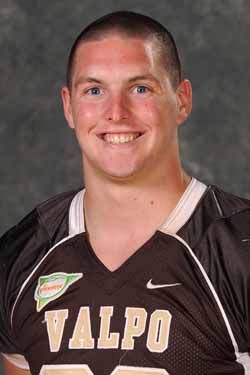 2014: Started all 12 games for Valpo at defensive end...announced as an USA College Football I-AA FCS Pre-Season All-American Defensive Honorable Mention...led the Crusaders in tackles for a loss (13.0), sacks (5.5)...earned Academic All-PFL Second Team honors...was named an All-PFL Second Team recipient...collected 74 total tackles, good for third on the team...broke up a pass attempt and logged two tackles in the season opener at Western Illinois (Aug. 28)...was credited with half a sack in addition to four tackles in the home opener versus St. Joseph's (Sept. 6)...racked up a season-high 13 tackles (seven solo), 3.5 TFL, and a sack in Valpo's 39-30 win at William Jewell (Sept. 20)...added 1.5 tackles for a loss to his stat sheet at Campbell (Sept. 27) as part of a six-tackle afternoon...accumulated 11 stops, forced a fumble, and broke up a pass versus Marist (Oct. 4)...accounted for four tackles versus Missouri Baptist (Oct. 11) in the Crusaders' 55-7 Homecoming win over the Spartans...registered a QB hit, broke up a pass attempt, and ten tackles against Drake (Oct. 18)...tallied seven stops (five solo), four TFL, and three sacks for 19 yards versus Butler (Nov. 8) in a 17-3 victory over the Bulldogs...recorded three solo tackles at San Diego (Nov. 15)...closed out a brilliant junior campaign versus Davidson (Nov. 22) with three tackles and a pass breakup as part of a 27-13 triumph over the Wildcats...named to PFL Academic Honor Roll.

2012: Appeared in all 11 games for the Crusaders including two starts as a freshman...led the team in sacks (3.0) and tackles for a loss (6.5)...made his collegiate debut on August 30th versus St. Joseph's...recorded five tackles - including one for a loss - versus Duquesne (Sept. 15)...had four stops at San Diego on Sept. 22nd...tallied three tackles versus Butler (Oct. 6)...registered a season-high two sacks as part of a five-tackle game against Drake on Oct. 13th...followed up with another game where he broke up a pass and recorded five tackles with 1.5 for a loss at Dayton (Oct. 20)...recorded six tackles and half a sack versus Marist (Oct. 27)...notched another half a sack and two tackles in Valpo's 41-21 win over Campbell on Nov. 3rd...had three tackles at home versus Davidson (Nov. 10)...finished up a strong first-year campaign with a six-tackle performance at Morehead State (Nov. 17)...a 2012 Pioneer Football League Honorable Mention recipient...named to Pioneer Football League Academic Honor Roll.

Prep: A four-year letterwinner for the Pirates ... two-time First Team Division IV All-State honoree ... conference defensive player of the year as a senior ... also earned All-Conference honors as a junior ... twice named to All-Distrct First Team ... set a school record with eight blocked kicks in 2010 ... ranks second in the state of Ohio for most blocked kicks in a season ... helped lead Black River to regional quarterfinals as a senior for the first time since 2003 ... also lettered in basketball and track and field ... won district title and finished tenth in the region in the discus throw.

Personal: John is the son of Steven and Lori Guilford ... major is mechanical engineering ... born March 17, 1994.