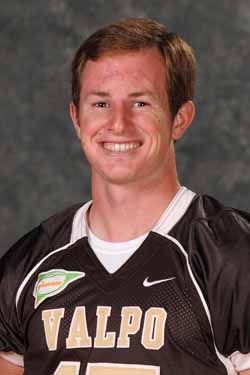 2014: Appeared in one game for Valpo on special teams...split the uprights on a 21-yard attempt versus Missouri Baptist (Oct. 11) while also recording two kickoffs for 118 yards.

2013: Played in eight games for the Brown and Gold in his sophomore season...accumulated 478 yards on 14 punts...nailed a 36-yard field goal in the season opener at North Dakota (Aug. 29)...averaged 38 yards per punt on four boots versus Morehead State (Oct. 19), pinning the Eagles inside their own 20-yard line twice and notching a long of 52 yards...racked up ten punts for 326 yards at Drake (Oct. 26) including three inside the Bulldogs' 20-yard line...also registered thirteen kickoffs for 535 yards.

2012: Appeared in two games for the Crusaders...made his collegiate debut at Youngstown State (Sept. 8) where he recorded a 43-yard kickoff...had a 42-yard kickoff at home versus Drake (Oct. 13)...named to Pioneer Football League Academic Honor Roll.

Prep: A three-year letterwinner for the Indians ... named team’s Special Teams Most Valuable Player as a senior ... set a school record for most extra points in a season with 61 ... team went 33-4 during three seasons ... a four-time Academic All-South Suburban Conference selection ... an Illinois State Scholar ... also lettered in tennis.