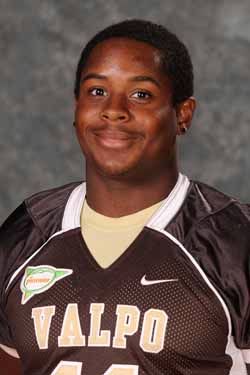 2014: Played in all 12 games for the Brown and Gold in his junior season...amassed 42 tackles (two for a loss), one forced fumble, two interceptions, and broke up six passes...logged five stops in the season opener at Western Illinois (Aug. 28)...set a season watermark in tackles with seven at St. Joseph's (Sept. 6) in Valpo's 39-30 victory...registered four solo stops, including one for a loss at Campbell (Sept. 27)...broke up a pair of pass attempts versus Missouri Baptist (Oct. 11)...forced a fumble, picked off a pass and tallied three tackles versus Drake (Oct. 18)...recorded another interception the following week at Morehead State (Oct. 25)...racked up seven tackles and broke up a pass at Dayton (Hov. 1)...batted away a pair of pass attempts in the Brown and Gold's 17-3 win over Butler (Nov. 8)...tallied five solo stops over his final two games.

2013: Appeared in the season opener at North Dakota (Aug. 29) and recorded three tackles.

Prep: A three-year letterwinner for the Knights ... a Wendy’s Regional All-American ... named Most Valuable Player of the Mel Kiper 7-on-7 tournament ... team finished number one in Washington D.C. ... also lettered in lacrosse and basketball.